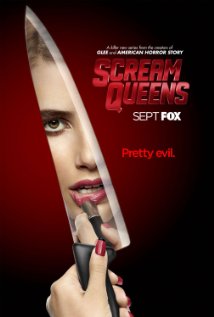 The generally accepted path for a slasher story to take is that young, lively characters are introduced and over the course of the tale we watch them get stalked and slain by a vengeful mystery killer. Unless you happen to be Ryan Murphy. If you’re Ryan Murphy you create a set of obnoxious, nasty, bitchy girls as the centrepiece of your little slasher universe while the audience enjoys the anticipation of watching them die later. And you kill precisely none of them.

For all the masses of hype Scream Queens threw up all around itself like a bulimic sorority girl – Nick Jonas! Ariana Grande! Random fashion blogger girl! – after 13 loooong weeks of enduring little more than a parade of acid-tongued put-downs, the series fizzled out with a damp squib of a finale that was akin to promising a child an Xbox 360 for Christmas and giving them a box with some cat shit in it. 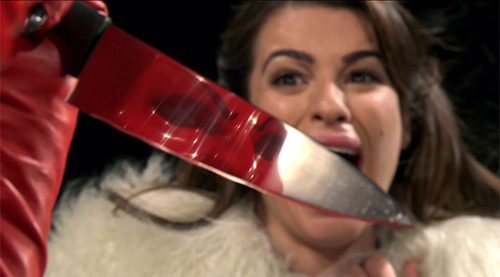 I watched Glee for awhile and, for awhile, it was fun. Pristine acapella arrangements of great songs that slowly began to morph into bland, straight-up cover versions, just as Scream Queens might have begun its life in script-form as an ode to all things stalk n’ slashy. I know Murphy is at the very least capable of decent horror scribblings thanks to the early seasons of American Horror Story and his dealings with The Town That Dreaded Sundown. But for all the “I was obsessed with slasher films” rhetoric, you’d think he watched Sorority Row and half of a Halloween sequel and thought “I can do that.”

Emma Roberts leads the cast as the Kappa Kappa Tau sorority president, Chanel Oberlin, no more than a retread of her role as a bitchy actress in American Horror Story: Coven. She spends much of her screentime calling her sisters sluts, whores, or gashes, making borderline racist comments and reminding us how rich she is. This type of character is supposed to die. The inexplicable supposition that gay men adore this type of high-society, entitled thing has always eluded me, but Murphy and co. aren’t able to write interesting ‘nice’ folks anyway.

Twenty years (never nineteen, never twenty-one) after a girl dies during childbirth at the  sorority, the hardass Dean (Jamie Lee Curtis, a bright spot) goes to war with Chanel and alters the charter to allow anybody to pledge the house, leaving them with just a handful of misfits rather than the usual tide of label-loving, anorexic, bitches who hate everybody. Said group includes Lea Michele’s back-brace wearing weirdo, a candle vlogger, another girl known as Predatory Lez for several episodes, plus the cut-n-dried homespun heroine, Grace. 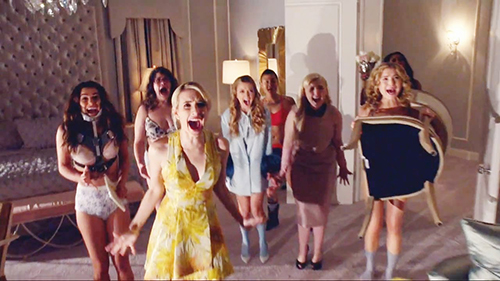 Coinciding with this, a psychotic killer wearing the school’s mascot uniform – a Red Devil – begins targeting all those associated with the sorority. The ensuing twelve episodes should play along the mystery theme as Grace tries to solve the mystery while Murphy would skewer slasher tropes and rapid fire bitchy girl dialogue. It worked for the aforementioned Sorority Row because they bothered to KILL Leah Pipes, but, save for a few decent lines, it doesn’t work here.

With a murder-count of 20, the show notches up zero heart-pounding chase sequences. There are a few splashes of gore here and there but most of the kills are supposed to be funny rather than horrific. That nearly all the victims are ancillary characters and not the vile, entitled main roster is just salt in the bloody wound.

Were the project to be edited down to a 90-minute film, most of the top-tier cast members wouldn’t even feature as the central clique of bitchy girls spend more time commenting on fashion, body image, boyfriend prospects, or plotting against one another. By the eleventh episode, there have been at least three attempts to murder the person they suspect is the killer. There’s so little going on upstairs in this show that it’s forced to recycle the same material just to fill out its half-season quota. 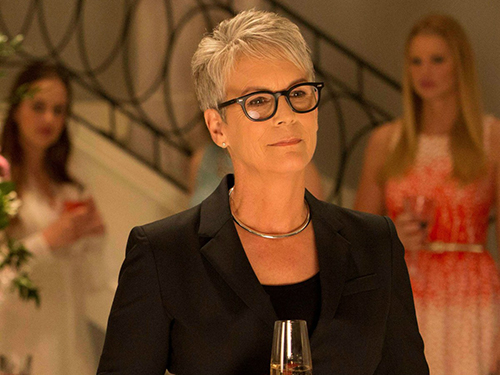 Eventually, several different characters are revealed to have committed murder at one point or another, at least two of them get away with it, while the production pinky-swore that there would only be four characters left standing for the say-it-ain’t-so summer camp set season two, there are in fact ten. It reeks of Murphy et al being too afraid to lose their cast members in case, god forbid, a second season is greenlit. It’s a slasher story, fucking grow a pair and kill someone other than the pizza guy, the replacement mascot, or any other one-episode arc extras!

Even the ‘good guys’ are made up of bland, barely drawn out bores who are too serious and not worth rooting for. Niecy Nash’s hopeless security guard rocks the boat with the best lines but is still marginalised and written as a dimwitted moron; Curtis chews up the barbed dialogue, easily outperforming her co-stars in the laughter stakes; and there’s a very good soundtrack to prop things up. Here though, the positives abruptly end.

How a so-called slasher tale could be so wimpy and gutless is a testament to some atrocious decision making. It’s like Jason restricting himself to murdering hitchhikers and rednecks around Crystal Lake but never bothering to hunt down the pot-smoking, sex-having camp counsellors!

This makes Scream – The TV Series look like Scream – the movie.

Blurbs-of-interest: JLC’s slasher credentials go from Halloween, Halloween II, Prom Night, Terror Train, Road Games, in the early years up to Halloween H20 and Halloween: Resurrection more recently; Emma Roberts was in Scream 4 and later in American Horror Story: 1984 along with Billie Lourd; Oliver Hudson was in the Black Christmas remake; Steven Culp made a brief appearance in the same episode as Jason Goes to Hell was name checked (incorrectly, I might add).