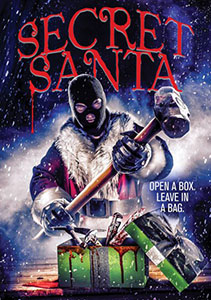 Laughter Lines: “You seem like a good person, please don’t do this.” / “On the contrary, I’m a psychopathic killer… with a knack for body dismemberment.”

I should take a certain amount of responsibility for this picture as I donated to the Kickstarter campaign that funded it. Look, my name is in the credits!:

Anyway, shot for a mere $6,000 CAD and garnished with that grainy 80s VHS look (but still including iPhones n’ shit…), Secret Santa is another of those back-to-basics productions.

A group of students taking some pre-Christmas holidays exams gather together for a festive party and, during the titular exchange, unwrap an array of weaponry ranging from a meatcleaver, through garden shears, hairdryer, and electric carving knife. “I didn’t get you that!” they caw, and we’ve already figured out that each gift represents the method of dispatch for its recipient.

Even at 78 minutes, it takes some time to get to the party, via the obligatory opening murder (the girl who takes a shower, obvs), exam stress, heroine Nicole’s guilt over how she’s earning money to pay her student debts, her boyfriend cheating with the nominal easy-lay, and some bizarre subplot about one of them being on drugs or something? I honestly didn’t understand his deal. 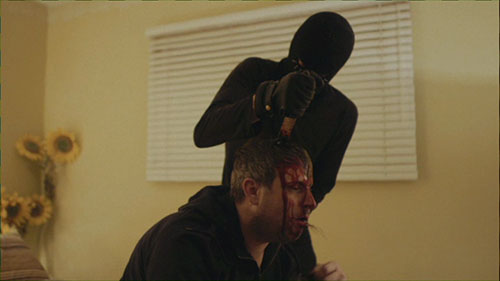 Secret Santa dances a line between adding comical lines and references and outright parody. A couple of moments are genuinely good, like the killer attempting to toss the hairdryer into a bath but the cord coming out of the socket, and the two-hour exposition from the killer, once unmasked.

The identity of the fiend is the ace up the sleeve here, although in many ways it makes next to no sense and signposts the departure from horror to comedy, but there’s something almost genial about the reveal, which reminded me of Slaughter Studios.

Hopefully the film will shift enough to finance a future, higher-budgeted project, because there’s definitely a talent at play there.