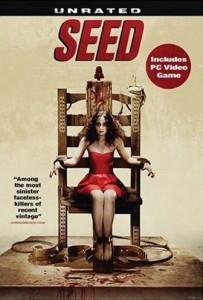 At the “world premiere” of Seed, much-critiqued director Uwe Boll told the audience he wanted to make a horror film “that was no fun.” Well, he’s done something right…

Seed begins with a warning that it contains “actual scenes of torture,” but the only ‘real’ footage is that of animals a pelt house, supposedly being watched by the killer. It’s gross, to be sure, as a soppy animal lover and immediately dragged my dog closer to me in protection from it’s icky grossness. Strangely – and possibly emphatic of the criticism levelled at Boll’s questionable skills – none of it has anything to do with the rest of the film, which is set in 1979, although we don’t learn this until we see the date written down at least one third of the way through!

The loon here, Max Seed, has apparently murdered 666 people in 6 years – which means 2.13 victims per week without being caught. Yeah, Uwe, “OK”. We see the killer’s cell where he starves various unfortunates to death, starting with a dog (mine is huddled ever closer), then a baby. Through time-lapse photography, they rot into skeletons. Fairly grim. I toy with ejecting the disc and skipping this one altogether.

“Fortunately”, things brighten up just a lil bit once he is caught and strapped into The Chair. There’s some gibberish about the chair not working properly and a bullshit triple jeopardy rule that states if a convict survives three jolts of electricity, he goes free! The prison warden, doctor and detectives conspire and bury Seed alive. A happy ending? Hell-to-the-no! Seed digs himself free and does away with those responsible.

On paper, the plot sounds familiarly acceptable (echoes of Welcome to Spring Break and Destroyer) but the film is half over by the time the stalk n’ slashing begins and is structured so unconventionally that the story is neo impossible to follow. Character names are unclear, as are their roles for the most part, hell they don’t even tell us when the damn thing is set for ages! The absence of any identifiable hero or final girl doesn’t help matters either.

This is the first Boll film I’ve seen, likely to be the last as well. Technically, there’s some negotiable ability there but a brief scan of the articles the detective reads reveals countless spelling and grammar errors – it’s like nobody even tried. Seed, schmeed, ‘PC game’ (!?) included or not. FAIL!