Sequel Showdown: 5s, Fives, and Vs

The further down the dark alley of multi-sequel franchises we go, the less light there is, and so we’re left with just seven films to choose from – so once again I’ve chucked in a Saw sequel to prevent the cart from spilling…

So, on with the fives…

Friday the 13th Part V: A New Beginning; A Nightmare on Elm Street 5: The Dream Child; Halloween 5: The Revenge of Michael Myers; Children of the Corn V: Fields of Terror

Strangely, the three ‘big’ names in this round all have weirdness surrounding their titles: Friday 5 has no numerical suffix on the film itself, the same with Elm Street 5, and Halloween 5 appears on screen without the lengthy subtitle. Freddy and Michael’s fifth rounds, released within two months of one another, are both dreary affairs, whereas the fifth Corn movie is a fun, but of course entirely stupid and wildly off course with the previous and subsequent entries, leaving the gateway open for , uh Friday 5 to take the win. Yes, it’s massively hated and not nearly as well made as the other films, but it’s by far the most fun!

As before, I’m cruelly giving Jigsaw the kick straight away, followed by Wrong Turn 5, which could have appeared in the prequel round, but as Wrong Turn 4, was the ‘official’ prequel, and this just a sequel to that which happens to take place before the original movie, it lands here instead, failing anyway. The same could be said for FD5, but given that it’s prequeldom is in fact the ‘ big twist’ and that it otherwise plays out as a regular sequel until the last few minutes, we find it here instead. Seed of Chucky is funny but I’m not wild about the franchise, so it loses out to Death itself. 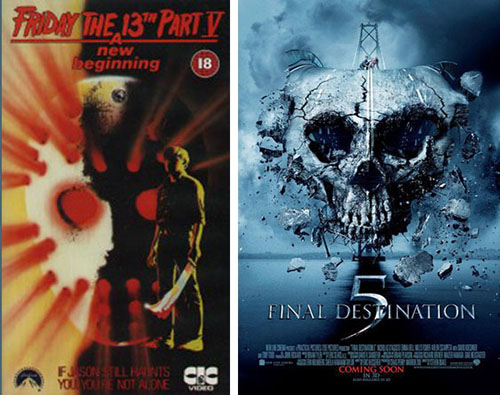 So, not the most flashy of finalists and being that there are only two is also quite dull… For sixes, sevens, eights, etc, there won’t even be enough films to declare finalists, so make the most of it!

I don’t care what anybody says, Friday 5 is super-fun. So there’s no Jason (bar dream sequences), all manner of ridiculous set-ups, no end of babes willing to pop their tops, and just about every cut n’ dried slasher cliche in the book thrown into the mixing bowl, plus proto-Madonna punk girl Violet robot-dancing around her room.

So, it would be wrong to declare anything other than… 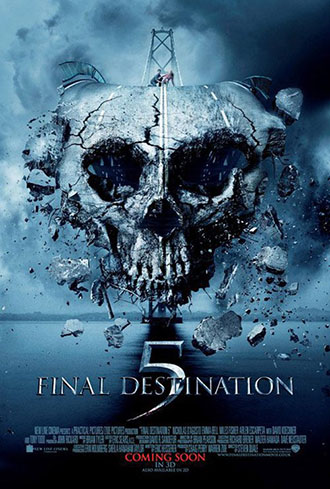 THE Final Destination [4] was supposed to be Death’s last word. Its 3D gimmick – however dreadful – somehow managed to rake in masses of box office receipts, more than enough to prompt a further chomping of the bit. In spite of the utter crap left in the wake of the previous film, and more 3D to send all manner of implements and shrapnel flying at the audience, Final Destination 5 turned out to be something of a gem.

While not doing the same business as the earlier one, FD5 brought back Tony Todd as Death’s riddle-spouting pal, provided a best opening catastrophe since the original, and also packed a great twist, albeit one that leaked before the release date. If there’s a better #5 in the body count realm, I’m yet to encounter it.

tagged with children are evil, Friday the 13th, gore o'clock, Halloween, one two Freddy's coming for you..., sequel city, slasher, the 80s