“Are those… PUSSY willows?” 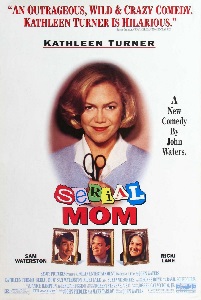 “Every woman wants to be wanted …just not for Murder One.”

Unequalled satirist John Waters skewered America’s unhealthy obsession with serial killers in this razor-witted cult classic, which functions as a slasher movie when you zoom out a bit and take stock of the elements. Spoilers follow.

Kathleen Turner is just perfect as Beverly Sutphin, all-American mom and model citizen of suburban Baltimore. But when the behaviour of others conflicts with her orthodox view of the world, she tends to get a little …stabby. First to go is son Chip’s math teacher, who criticises his obsession with horror movies and suggests it may be indicative of family problems. Beverly mows him down with her car. 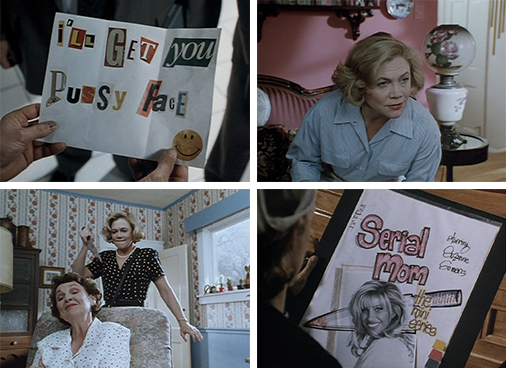 This coincides with a police investigation into obscene calls (and mail) made to neighbour (and so-called friend) Dottie Hinkle, all because she took a parking space from her one time. These phone calls may well be the most hilarious scene in the film, as is the moment when Beverly decides to out herself as the caller.

While somehow managing to prop up the outward illusion of being the perfect mom, Beverly offs daughter Misty’s sort-of boyfriend, a suburban couple she takes a dislike to, a rude customer of Chip’s video store, and her son’s best friend who witnesses one of her murders and is, himself, done away with during an L7 concert – the audience cheering as he burns to death and the lead singer spits vodka on his corpse. 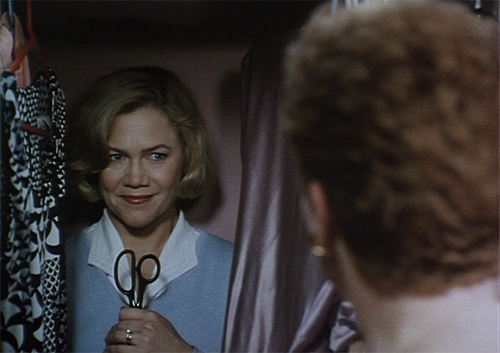 As any serial killer documentary should, things end with a grandiose trial, where Beverly continues to manage to thwart the attempts of the prosecution repeatedly, winning everybody over. Waters continues to crank the satire, with nods to serial murderer groupies, the family selling out to the merchandise racket (Misty sells t-shirts and badges showing her mom’s face during the court recesses – “could you sign it to a future serial mom?”), and the whole circus of the courtroom, including the arrival of Suzanne Somers, who is slated to play Beverly in the movie.

When you account for Beverly’s means of execution, it tallies with the general slasher movie consensus of no two people dying the same way: Murder by fire poker, scissors, air-con unit, and leg of lamb! The victims adhere to a sort of forgotten anonymity in a further glance to the culture of western media’s apparent preference to glorify the killer rather than those they killed. 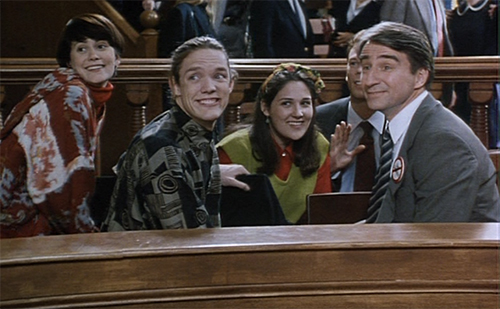 These things aside, Serial Mom still functions best as an uproarious comedy, so black and wicked at times that it feels dirty. The courtroom swear-off between Dottie and Beverly is the stuff of legend, and in addition there are endless barbed lines, gross-out humour (Chicks-with-Dicks won’t go unforgotten), and frankly ridiculous coincidences that only lend themselves positively to the whole product.

Enough cannot be said to highlight just how good Kathleen Turner is in the role, expertly pivoting the vail between sanity and seeing red; she’s able to change in a snap from affable friendly mom to frightening psychopath. 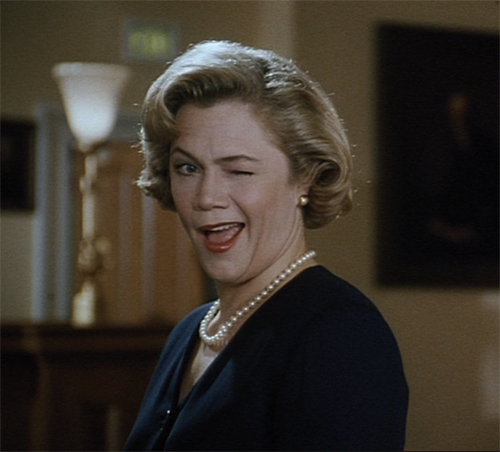 I’ve been against classifying Serial Mom as a slasher movie for a while, but it can be denied no more that it certainly utilises more than a fair share of the template to get where it’s going.

Blurbs-of-interest: Matthew Lillard went on to star in Scream; Justin Whalin was the lead in Child’s Play 3; John Waters played the paparazzi in Seed of Chucky.

tagged with before they were famous, spoilers, star power, yo! Hollywood