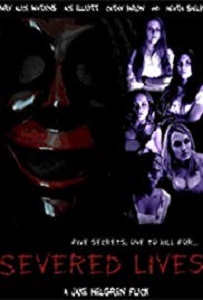 “Five secrets. One to kill for.”

This half-length debut was shot for south of a thousand dollars by Jake Helgren, who borrows shots and set-ups from some of his favourite slasher flicks to tell the story of a group of film students attempting to bring together the script for a horror documentary about the two-decades old murder that occurred on their campus. Unfortunately for their project – and even more unfortunately for them – a masked loon appears on the scene and begins strangling and skewering them one after another.

While the picture and sound quality occasionally suffers under the constraints of the price tag, this is a well put together film with good performances. It’s clear that the cast and crew were having a ball making it. Look for the shelf bowing with slasher movies in the bedroom scenes.