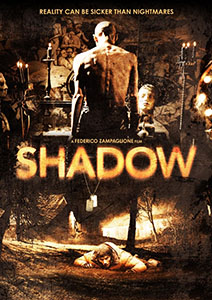 “Reality can be sicker than nightmares.”

If you were unfortunate enough to see damp-squib teen-horror Soul Survivors a decade or so ago, here’s an Italian gore-up contemporary with a similar twist in its tail, although far better realised and accompanied by an extra last-second sting.

Muxworthy is David, a US soldier recently out of Iraq and, before heading home, takes a European cycling vacation to help himself get over some of the gruesome sights he bore witness to.

He stops off for a rest at a tavern in the woods and ends up rescuing fellow cyclist Angeline from the unwanted attention of a couple of aggressive American hunters. David and Angeline spend some time together and save a deer from being shot by the rednecks, who then give chase. 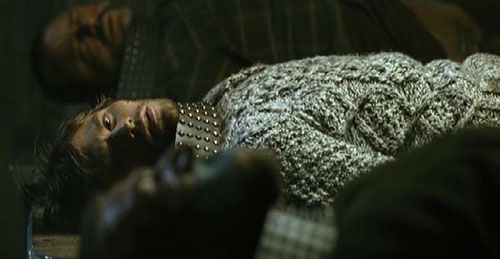 An accident renders all four people – and the rednecks’ dog – injured and stranded, only to be captured in quick succession by an unseen assailant. The three men wake up strapped to adjacent tables, fit for torture from a scrawny Seventh Seal-looking dude who takes great pleasure in causing them pain.

One guy is slowly cooked on the table and David’s eye is swapped out for a glass replacement but, when the maniac breaks for lunch, he manages to squirm free and release his fellow captives. They soon run into the loon again while David searches for Angeline.

There’s not much going on in this quickie, which seems to wrap up just as it gets going, like Zampaglione was so desperate to get to the twist he couldn’t be arsed to show us what happened to the rednecks (who are killed off camera).

The revelation is so-so, but nothing that hasn’t been explored before in a number of horror films, varying from big budget blockbusters to DVD flicks, and the reliance on its shock factor means the rest of the film comes across like something of an afterthought, albeit a nicely shot and well-produced one.

Gorehounds might feel shortchanged that, in a torture movie, there’s very little grue to speak of, otherwise it’s worth the once over.

tagged with Euro-horror, get your own ideas!, slasher, weird-ass twist