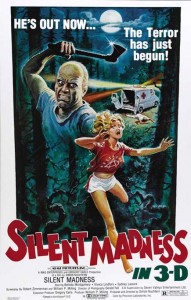 A.k.a. Beautiful Screamers; The Nightkillers; The Omega Factor

Dire-logue: “Just because the goddamn broad is so good looking don’t mean we all have to think with our dicks!”

Amazingly cool poster art and 3D aspect side, this no-frills co-ed campus slasher is pretty much a run of the mill two-star effort until it caught me out with a quite unexpected twist, which elevated it above the dime-a-dozen girls’ school terror subset.

A psychotic named Howard Johns (Marx) is accidentally released from an institute in place of the intended out-patient John Howard in the administrative error from hell! He gravitates back to the scene of a seventeen-years gone massacre at a sorority house and begins knocking off the girls who haven’t left for fall break in a re-enactment of the previous slaughter.

Meanwhile, Montgomery is the psychiatrist who believes something to be amiss when the creepy Dr Kruger (who speaks with a ridiculous English accent) claims that Johns is actually dead. So she goes to the sorority house where the nail-gun murders occurred and poses as ex-alumni while Kruger dispatches his duo of equally creepy attendants to catch and kill the wayward loon. Murders are intermittent and sloppy while Montgomery explores the house’s boiler room, which is roughly the size of a concert arena, allowing for drawn out stalk-a-thons therein.

Lindfors is amusing as the slut-hating housemother, whose role was far more obvious when I watched the film a second time. Some of the murder setups are seemingly intentionally funny: one girl is playing a video game and shouting (at it); “look behind you! slash! run!” while her friend is suspended upside down on a piece of gym equipment, Johns wraps one end of a skipping rope around her neck and the other around a barbell, which is then tossed out of the window! Acting, characterisation and credibility are all washed away in a tide of silliness and the roster of familiar faces seem wasted.

Blurbs-of-interest: Sydney Lassick was in The Unseen and was also Carrie‘s English teacher; Katherine Kamhi was the bitchy counsellor Meg in Sleepaway Camp; Elizabeth Kaitan (the skateboardin’ sister) was in Silent Night Deadly Night Part 2 and played Robin in Friday the 13th Part VII. Paul DeAngelo, also from Sleepaway Camp, is the first guy killed.