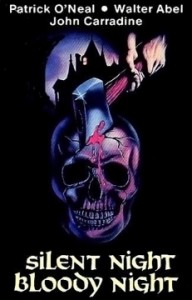 “The mansion… The maniac… The madness… No escape.”

Dire-logue: “One of the greatest pleasures in life is the pleasure of anticipating pleasure.”

A weird, head-swirling Acid trip of a horror movie is this, with little in the way of linear storytelling we’re used to, even in the sub-set of proto-Halloween shockers.

A small group of town locals who have been begging the last living member of the Butler family for permission to buy the empty old Butler House finally get their wish when a solicitor comes to town just before Christmas and informs them they can have it for $50,000 cash.

Why do they want it? And who is it who just busted out of an institution and is heading back to the family home? More to the point though, who is making whispering calls to the purchasers and luring them to the house to chop them up? Mayor’s daughter Diane (bad movie fixture Woronov) teams up with Jeffrey Butler – the seller – to try and find out what’s going on.

Set almost entirely on one night, there are some shocking giallo style moments here and there, with the first axe murder coming pretty much out of the blue without any kind of the subtle stalker-style build up modern audiences have grown accustomed to in the post Friday the 13th years.

Many of the other genre conventions are firmly in place though, with an inquisitive final girl in Woronov and a shady taunting killer. His/her calls aren’t wildly dissimilar to those later found in Prom Night, showing just how influential SNBN may have been.

Unfortunately, the zero budget ultimately flaws the production, and nobody seems to have been bothered about remastering the transfer to the many cheapo DVD editions that litter Amazon, resulting in several hard-to-see-what’s-going-on scenes.

Blurbs-of-interest: Woronov would later suffer through The Movie House Massacre; Carradine was also in The Boogeyman.

tagged with before they were famous, slasher, spunky final girl, star power