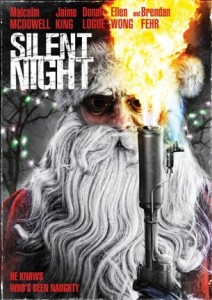 “He knows who’s been naughty.”

Dire-logue: “What you think this is, Glee?”

A mooted remake of parent-upsetting 80s B-movie Silent Night, Deadly Night had been on the cards for some time, and at the tail end of ’12 it finally arrived. Week 2 of 2013 if you’re me.

While it could just as easily pass for another sequel rather than a cover version, Silent Night maintains the core elements of the original film and its shoddy sequels: Killer Santa lays unpleasant folks to waste with mucho seasonal mirth.

Here, the small Wisconsin town of Cryer is the stomping ground for the Saint Nick-clad loon, who kicks things off by electrocuting a poor chump with tree lights, and then heads into town for some much needed Scrooge-pruning. 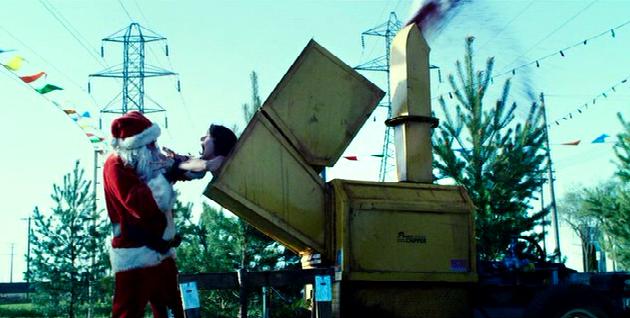 Picking up the pieces in Santa’s wake is undecided deputy Aubrey, who is recently bereaved and can’t stand up to the pissy demands of Sheriff Cooper (McDowell, camper than tinsel). He wants to keep quiet about the growing body count so’s not to disrupt the annual Santa parade, where, naturally, there’ll be five-hundred blokes dressed the same.

Silent Night tosses aside any trace of the orphanage prelude to Billy’s rampage from before, heading straight into the killing field and revealing everything about the killer as almost an after thought once the violence is over. It’s not a bad reveal, though I was left wondering just how Santa knew who to kill and where to find them.

The film is a bit of an empty vessel, loud and in your face but insubstantial otherwise. It has just as much in common with the more recent Santa’s Slay as it does the film it’s allegedly a remake of. The deer-antlers impalement returns, as does the looney sub-catatonic grandpa, as well as an allusion to the infamous “Garbage day!” moment from Part 2, but otherwise we’re skiing on fresh bloody snow. The gore is indeed gory, more than enough to please claret lovers, who will surely love the sight of a topless babe being fed into a woodchipper and there’s also a squishy axe to the face for a light-fingered teen. 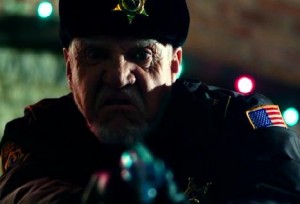 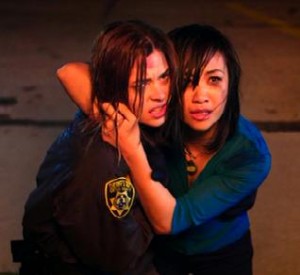 The Grinch in all this gooey delight is the film’s attitude to Christmas itself: Fair enough, the film is set in a town suffering the loss of its major industry (echoes of My Bloody Valentine) and Psycho Santa is only after the nasty folk, but there’s a definite lack of Christmas spirit to offset the misery, leaving only snarky dialogue, less than pleasant characters, and bloodletting. It doesn’t feel Christmassy like the films it apes – even if they also ended in a stack of cadavers.

Logue is largely wasted as a Santa with a bad attitude, but King manages to keep a straight face as the put-upon heroine and Ellen Wong (from Scott Pilgrim) is a nice diversion in her rather marginalised role, and McDowell simply chews his way through every scene, relishing the assholery of his character.

Fun, but fleeting and slight – like most things about Christmas, really, with that sort of plastic won’t-last-till-January feel to it. 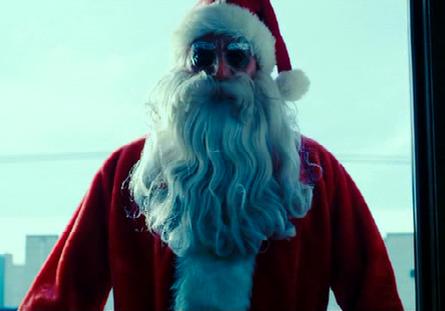 Blurbs-of-interest: McDowell played Dr Loomis and Rob Zombie’s Halloween re-dos and was also in The Surgeon and Mischief Night; Jaime King was in My Bloody Valentine 3D and The Tripper; Lisa Marie was in Sleepy Hollow.