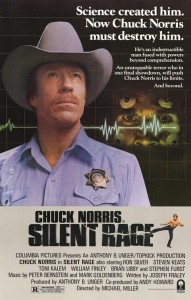 “Science created him. Now Chuck Norris must destroy him.”

Even with a body count that reaches double figures, this attempt to fuse martial arts with a slasher opus flatlines through boredom and is desperately predictable for its running length. A man wakes up in his rented room, calls his doctor and says he can’t take it anymore before donning an axe and chopping up his landlady and some other poor schmuck. After a scuffle, he’s subdued and shot dead – or is he?

Meddling doctors feed him a formula they’ve been working on, which rapidly speeds up the regeneration of damaged cells blah, blah, blah. In short, dead guy goes Mighty Mouse and decides to go on a killing spree until the inevitable showdown with Chuck. Considering the film spends a spare reel on Chuck whipping some biker gang ass, it would’ve been nice for said bikers to have provided extra victims for the psycho, but they leave forgotten as soon as their bar brawl scene wraps.

Meanwhile, things shift from aping Halloween to a Halloween II deserted hospital killfest, which sees Kalem’s hysterical heroine chased along empty corridors for an eternity and Stephen Furst as a comic bumbling deputy who is heartlessly killed off in the only unexpected twist on offer. The final smackdown is good for laughs but the horror audience will feel short-changed by everything else, except maybe the cheese that oozes from the poster!

Blurbs-of-interest: Michael Miller also directed National Lampoon’s Class Reunion, which co-starred Furst, who was also in The Unseen. Ron Silver was later in The Wisher.