When she was bad 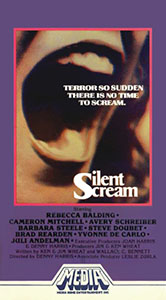 “Terror so sudden there’s no time to scream.”

A movie like Silent Scream wouldn’t get made today. If it did, it’d be one of those skid row budget things that was released by the smallest DVD distributor around, everyone would hate it, and it would sink into the nether realm of lost films.

Thankfully, this was not the case back in the late 70s, when it was produced as a speculative reaction to the (at the time) modest success of Halloween. Spelling it out, the ADHD generation of today will probably hate the fuck out of it.

Transfer student Scotty (Balding – rocking great hair and sunnies) arrives at her college too late to find on-campus accommodation and ends up taking a room in a picturesque but eerie ocean front mansion, owned by recluse Mrs Engels (de Carlo), and run by her son. 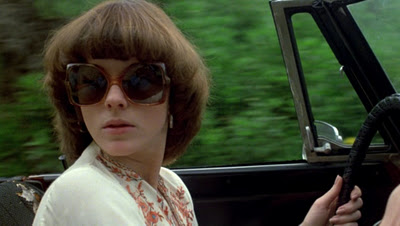 Things get weird when Scotty keeps hearing the same 50s love song playing somewhere in the house. Turns out that Engels’ daughter and ex-prom queen Victoria (the eternally marvellous Steele) is living in the attic, where she stares blankly at a picture of her younger self stuck over a mirror.

In her more desperate moments, Victoria stabs to death the other boarders, who remind of her disappearing, pre-lobotomy youth – until Scotty stumbles into her room.

Good characters played by a rather exceptional cast distinguish this slow-burn affair, which features creepy murders (albeit very few of them) and a surprising finale in which Victoria isn’t the only one to lose her shit.

A higher body count would’ve helped but as it is, Silent Scream does it’s job well with more class than most of the post-Carpenter efforts.

This is one I’ve regrettably not seen in a long, long time. 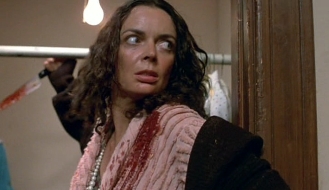 Blurbs-of-interest: Juli Andelman was the lead in Blood Cult; Yvonne De Carlo was also in American Gothic; Cameron Mitchell was in The Demon, Jack-O, The Toolbox Murders, Trapped Alive, and Valley of Death.