Why bother calling it anything else? 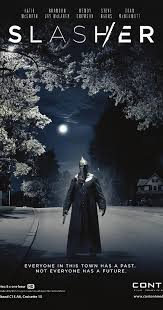 “Everyone in this town has a part. Not everyone has a future.”

Laughter Lines: “He’s made himself judge, jury, and …hangman!”

Harper’s Island, Scream: The TV Series, Scream Queens, and now Slasher. The Chiller channel’s Canadian eight-part mystery is the latest loon-with-a-knife outing to go straight to the small screen rather than straight to DVD. The generic quality of the title allows for future seasons to start anew with a body count tale in a whole different place and time.

Eight episodes work out better than Scream Queens’ interminable unending thirteen, as the welcome isn’t completely worn out, hacking through our senses until we can take no more and only seeing Ryan Murphy chainsawed to pieces stands a chance of fixing it.

Here, the small town of Waterbury, Halloween 1988, an expectant couple are slaughtered by a machete wielding loon dressed in a creep executioners garb. Twenty-eight years later, the saved infant, Sarah Bennett (McGrath, recently eaten in Jurassic World), moves back to town with her journalist husband Dylan (the always likeable McLaren, dreads sadly gone, but becoming a familiar genre face). They move into the same house. Where the murders happened. Face palm. 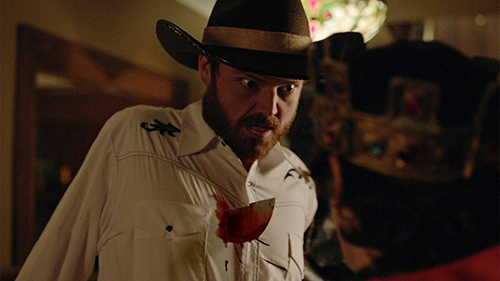 No sooner has Sarah settled in, opened a gallery, made a few friends, The Executioner returns and begins ridding the township of various individuals based on the Seven Deadly Sins: The abusive old lady across the street goes first, then a merciless developer… Anyone with a dodgy secret has their days numbered.

Sarah turns to her parents’ incarcerated killer, Axl Rose lookalike Tom Winston, for help before The Executioner comes for her, and begins developing a bizarre co-dependant relationship with him, that eventually leads to a rather obvious revelation, given that her late mother turns out to have been giving Maureen Prescott a run for her money. Or rather, more bang for her buck.

Inventive murders include a guy stuck in a hole with a sack of deadly snakes tossed in, a severed head found in a deep fryer, live cremation, eaten by nature, plus the usual stabbings, drownings, and beheadings. 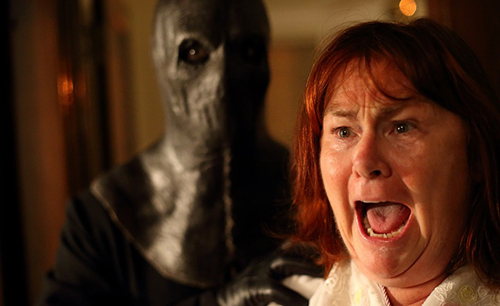 Could it relate to the girl who mysteriously went missing five years earlier? A cinderblock dropped on to a car from a bridge in 1968? Or something else completely?

Slasher has a relatively tight budget compared to the other recent series’, which results in a smaller, easier to manage cast roster, and a body count that doesn’t go stupidly ballistic. It plays more like a 90s Scream contemporary than anything (aided by the same writer and director overseeing the whole thing), drawn out to cover the episode order. But this is no bad thing, despite some of Sarah’s decision making, which sees her become BFF’s with a murderer, and venture down numerous dark alleyways on her own.

The killer’s identity, revealed a little sooner than expected, doesn’t make a whole lotta sense, but things take a real dark turn come the end, which bucks the usual trend of the final girl’s passivity in the face of closure, which was pretty impressive. Here’s hoping Season 2 can at least match the potential on show here, hopefully with a more generous financier. 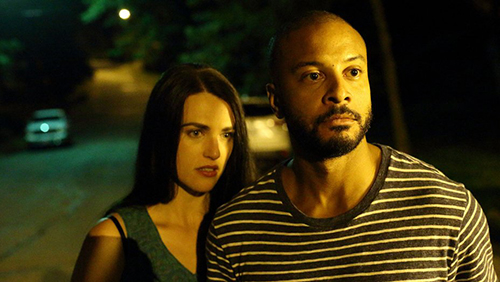 Blurbs-of-interest: Brandon Jay McLaren was in Harper’s Island, Scar 3D, Tucker and Dale vs Evil; Katie McGrath was in Red Mist; Erin Karpluk was the lead in Ripper 2.