So, like, remember The Dark of the Forest, that slasherific comic book from dead-teen enthusiasts Freaktown Comics?

Well, they’re back for a second bout of stacked up expired teens in Slashermania: 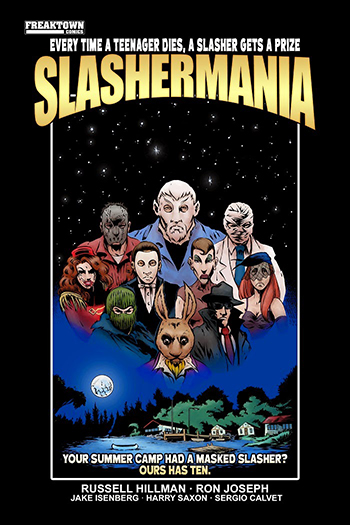 The plot is thus:

1983. Troubled teens from New York and Los Angeles are taken to a summer camp facility to be trained as counsellors and mix safely with other people their own age.  Little do they know they are being watched by an audience hungry for sex & violence. They are the designated victims for a bizarre contest of murder and mayhem –

“And the slashie goes to…”

Slashermania is written by Russell Hillman, with pencils by Ron Joseph, inks by Jake Isenberg, colours by Harry Saxon and letters by Sergio Calvet

The trailer is thus:

The Kickstarter page is here.