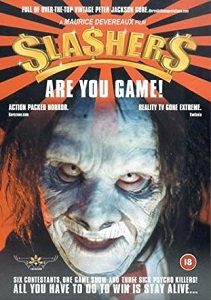 Part of the short lived death-on-reality-TV fad, Slashers appeared around the same time as Kolobos, My Little Eye, Voyeur.com, and everyone’s favourite, Halloween: Resurrection. I remember not being too psyched based on the video box and premise, but this turned out to be a fun little cheapie (with a budget of around $165,000), which passed the reigns of moral responsibility to the Japanese, known for putting contestants through hell on various game shows.

Six American contestants are invited on to the country’s most popular export, where the aim of the game is to stay alive for 90 minutes in a maze of various sets, while three professional maniacs hunt you down. Survive, and they bag the $12 million prize. Simples.

Despite the low-end production values, Slashers is cleverly engineered to look as it it’s one long continuous take once the poor schmucks have entered the maze. They bicker amongst themselves until numbers fall following encounters with any of the trio of loons: Chainsaw Charlie, Dr Ripper, and newcomer Preacherman (who actually flops big time). The American contestants fight back with more force than the usual homeland contestants and secure $2 million bonuses for each slasher permanently defeated, but political martyr Megan doesn’t want to resort to violence to escape.

Some shonky FX work here and there is kinda endearing and with a big budget, this probably could’ve been something of a hit at the height of the reality TV cycle.

Blurb-of-interest: Neil Napier was in Evil Breed: The Legend of Samhain.