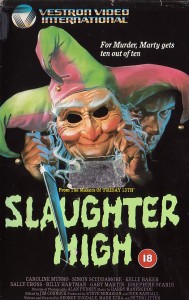 Another one for the filmclub de lá Final Girl…

I saw this film a long, long time ago on a date. Said date frowned and shot questioning looks my way throughout, wondering if there was actually something wrong with me. Explanations that “they’re [slasher films] not all this bad, I promise!” notwithstanding, that was possibly the beginning of the end of that relationship.

Curiously, being that Slaughter High was a UK-US combo project shot in Surrey (albeit pretending to be America), it’s never been given a DVD release here and, due to the bitter memories emanating from my VHS copy, I’ve not seen it again. It took three guys to write and direct this bizarro Friday the 13th pretender, which was scored by Harry Manfredini, thereby allowing those who write things on poster art to state that it was “from the makers of” that film.

Slaughter High sports the now classic revenge opus with a clique of popular kids at Doddsville High School, led by a then 34-year-old Caroline Munro (it was apparently shot in ’84), playing pranks on cookie cutter nerd Marty Rantzen, one of which ends with him being horrifically burned by acid. Caroline is sorry, the others aren’t really. 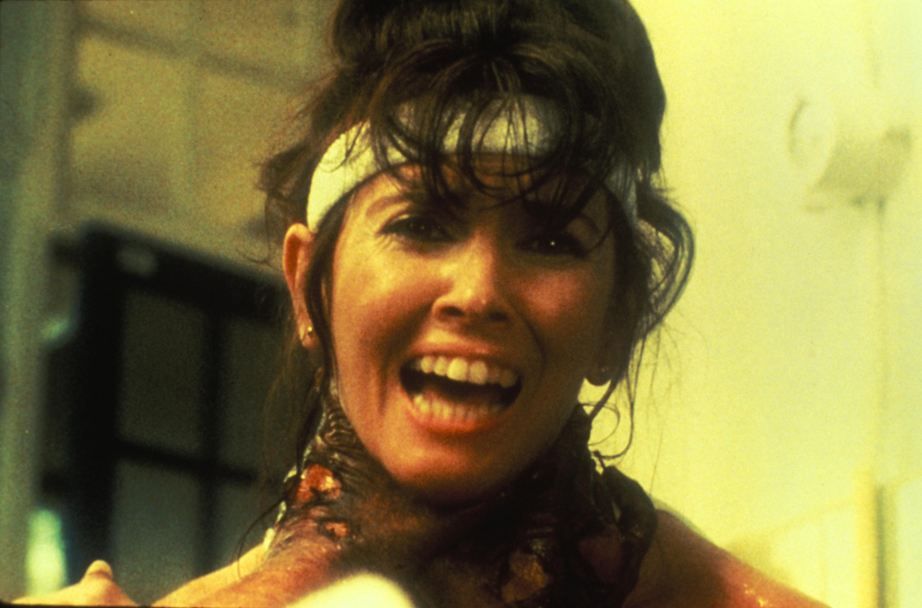 A decade on, all ten are invited back to a bogus reunion at the now abandoned school where they are quickly locked inside and picked off by the jester-masked Marty, who does them in creatively with acid-laced beer, a pit of sludge and the usual array of axes and knives. He also manages to ensure one chick – spattered in blood – takes a bath in acid, melting off her skin in all of twenty seconds.

Sooner or later, it’s down to Marty and Caroline. It climaxes slightly differently than one might expect but then there’s the twist. Jesus Wept, there’s that twist! If the inexplicable behaviour of most of the cast had you scratching your head earlier on, you’ll want to dig your fingernails through your skull and into your brain at the end proper.

As you can tell, I’m not a fan. But plenty are and the film has garnered a weird following over the years, partly due to Scuddamore’s subsequent suicide and the presence of bad-horror fixture Munro and the sometimes uncomfortable vibe the film has on parade, from seeing Marty full-frontally nude to the often sadistic deaths (deserved, I guess…), the film suffers from some of the lesser elements of British 80’s productions: grainy and drained of colour, it’s like a horror episode of Dempsey & Makepeace or a Bucks Fizz video that went askew! But they got it right with the jester mask –  it’s damn creepy.

Though it sucks, it’s kind of a crap-classic that I’ll give another spin one day should I require another date to make a quick exit…

Blurbs-of-interest: Munro and Baker both appeared in the even worse Don’t Open Til Christmas; Munro was also in Maniac and it’s sort-of sequel The Last Horror Film. And check out the pair of covers below, IMDb trivia states Cutting Class is a spin-off. Eww. 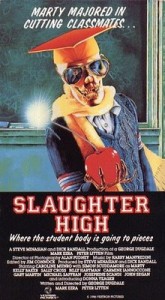 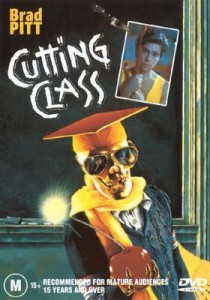 tagged with accents from hell, death on campus, Euro-horror, Final Girl Filmclub, get your own ideas!, gore o'clock, hair don'ts, Nu-di-ty, slasher, the 80s, weird-ass twist, what the hell!?