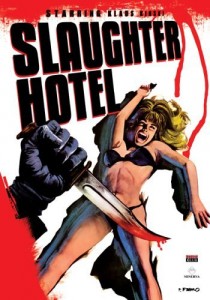 “A place where nothing is forbidden.”

Dire-logue: “Your desire to make love is obsessive; compulsive… Go and take a shower.”

Supposedly, men cannot go more than six seconds without thinking about sex. I don’t disagree with this assessment, but in a typical day of 16 waking hours, that’s 9,600 thoughts about sex. So…how many of those thoughts are bit sleazy?

In spite of itself, there’s nowt wrong with a bit of sleaze. It’s probably healthy! Ergo, how about this early Italian giallo that is practically dripping with sleaze? It’s certainly no Argento or Bava outing though; an institution in an old castle – seemingly only for glamorous, beautiful women – is the hunting ground for a cloaked killer who offs his victims with a variety of medieval weaponry.

Slaughter Hotel is less a horror film than some bizarro porn flick with interracial lesbian romps, endless scenes of naked women in bed, writhing with night terrors while doctors Kinski and Karlsen move around dishing up pop-psychology hypotheses’ for their fashionista patients. Bouncing along to a Loveboat-esque samba rhythm of flutes and various woodwind instruments, there’s precious little dialogue, most of which is badly dubbed and nudity far outweighs any violent content. In fact, half the body count is racked up in the last couple of minutes of the film, all of it female bar one poor schmuck who’s pushed into a handy iron maiden and skewered therein.

Kinski gives an uncharacteristically restrained performance in his thankless role while all the female characters simply drape themselves around set pieces waiting to be fucked of filleted. It’s a direlogue haven, as one man drives his gorked-out wife to the venue, she lunges for the steering wheel and, as if questioning an item on the shopping list, he says to her: “killing me is one thing but why commit suicide?” Indeed. Di Leo reportedly admitted never having researched institutions prior to the shoot, which is subtley evident in the finished product. A weird, weird experience that must be seen to be believed.

Blurbs-of-interest: the film is available on a variety of cuts, some with more of the sexual content cut than others. Kinski also played a shrink in Schizoid.

tagged with accents from hell, Euro-horror, hair don'ts, Nu-di-ty, slasher, slasher films that aren't supposed to be funny but are funny, what the hell!?, who finances this crap!?