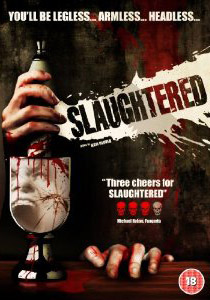 Britain and Australia share a pub culture like no other, different from trendy bars in the city, “the local” is the choice meeting point for all kinds of folk to sup on a pint, or – in the case of many – down so much that you fall asleep and later stagger on home.

A local pub is the setting for this Australian indie flick, which couldn’t have cost much more than a round of beers. With a plot so simple it was doubtlessly scripted on the back of a beermat, Slaughtered‘s got some problems alright with amateur night acting, a crap sound mix and an obvious killer who has absolutely no motive.

Yeah, that’s right! There’s no big unmasking or soliliquy of why-I-killed-y’all at the end, it just pretty much stops! Where are the cops? Why aren’t they clearing up bodies and collecting evidence? Why did everyone keep working despite the fact they’d found bodies strewn all over the joint?

If it was intended to be a parody, it doesn’t work. It’s funny but not in the right way and suffers from a major case of predictablosis with a second string of budgets disease. Although it must be said the gore jobs aren’t bad at all, despite that in the scene where a girl is forced to ingest shards of broken glass it’s clear as day that there’s nothing in the liquid!

Silly but inoffensive stuff, notable only for being one of the few slasher films directed by a Sheila.