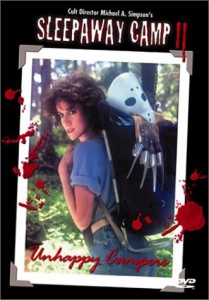 “Angela’s back and she’s bad.”

It should be wrong to say that any film solely about a series of murders is fun. By design, slasher films were initially scary and horrifying. Some go for the depressing and bleak tone and some simply fail at creating any impression whatsoever. But by 1988 when virtually everything ever had been done with the body count film, it was better to recline and poke fun at yourself. Freddy had been doing it for a while with hit and miss success but meanwhile, at the cheap end of the market, beyond the fishmongers and the gypsy handing out heather, the low rent filmmakers were camping it up with all the colour of a gay pride ticker tape parade – at camp no less. 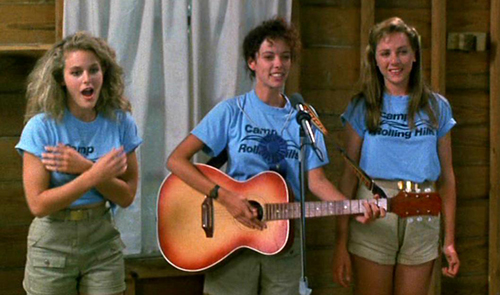 The original Sleepaway Camp in 1983 is an interesting film, albeit one that trades almost completely on the revelation of who the killer is, like who it really is. It would be twenty years before it generated its own ‘proper’ sequel (which then took another five years to appear on DVD). In the meantime, two back to back made for video sequels were produced and a third aborted in 1992.

Unhappy Campers wastes no time in demonstrating what it’s all about: a campfire recap of ‘the legend of Camp Arawak’ ushers in the now grown-up Angela, working as a counsellor at Camp Rolling Hills where she takes an active dislike to bad kids, which, in her screwy mind covers just about everybody.

Good girl Molly (Renee Estevez) seems to be the only one immune to Angela’s policy of ‘sending home’ those who flaunt their bodies, do drugs, or even talk too much. Interestingly, all the campers are named after actors from the Brat Pack movement in the mid-80s: there’s nasty bitchy Ally, who has lots of sex, horndog jock Rob, hunky Sean, sexy Mare, sassy black girl Demi, pervy brothers Charlie and Emilio and a load of backgrounders who simply pump up the body count.

Angela offs her victims using a variety of weapons from logs to guitar strings and barbecues, even brandishing a chainsaw for an amusing Angela (as Leatherface) vs. Jason vs. Freddy gag. Eventually though, after too many kids are ‘sent home’, she’s fired and goes a bit mad. 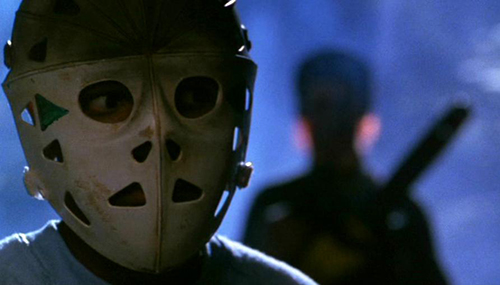 Sleepaway Camp II succeeds with its campy bright colours, the uniforms the kids wear and the cliche ridden tour through T&A and bloodletting, all underscored by Angela’s one-liners as she disappointedly lays another teenager to waste for showing their boobs or being mean to another kid. However, there are momentary flashes into the dark: Angela’s dream sequence is kinda freaky and she goes into a short depressed trance and tells Molly that she once drowned a boy who was nasty to her.

All this critique aside, you simply must see it if only just to bear witness to the immortalised crimes against hair: 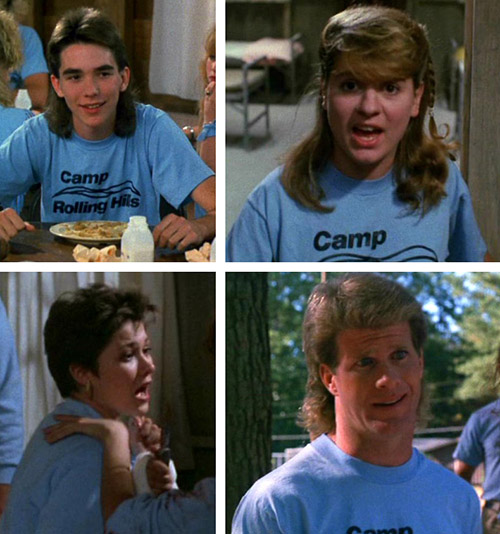 Quite possibly the most frightening thing about the film.

Springsteen (Bruce’s lil sis) is good in the role and the best thing about the not-so-fun Sleepaway Camp III and Estevez (Emilio’s lil sis) is a perfect fit for goody-goody heroine Molly. Keeping with the sisters-of-the-more-famous schtick, in the next film Melanie Griffith’s sister Tracy played the final girl.

Blurbs-of-interest: director Simpson and Springsteen returned for the third film; Estevez was also in Intruder; Justin Nowell played one of the campers in Friday the 13th Part VI.