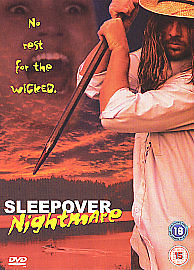 Cheap but likeable Canadian made-for-video outing (but shot on film, not digital) in which an escaped mental patient crashes a Labour Day party at a lakeside house and begins offing the teenage guests. Some references to cell phones and the like notwithstanding, here’s a film that looks authentically mid-80s and consequently doesn’t fall into the traps that claim most post-millennial slasher films: in short, it doesn’t spend the first hour trying to build up characters we won’t care about and cram all the action into the last 25 minutes.

Conversely, most of the kills in Sleepover Nightmare occur during the daylight at the party and only about 15 minutes of the film takes place after dark – making the title seem pointless in the extreme – lending it an all round more nostalgic feel that it’s been made out of love for the genre rather than as a pretentious ‘we know better’ vanity project with a crowbarred-in niche (see The Pumpkin Karver, Scar, Devon’s Ghost etc). That said, the film has obviously been padded out with a needless flashback scene, which tells us that the killer went berserk seven years earlier at a similar party, and ended up killing a few guests. 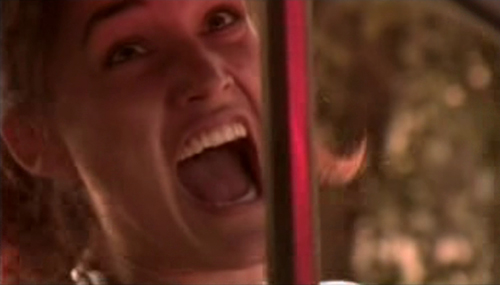 In the present day section of the film, he favours killing off the teens with a metal spear, but sets it aside to use cars, outboard engines and, in one memorable scene, impales one poor guy with his own beer can. It also benefits nicely from characters who aren’t overtly annoying, despite the presence of the stock asshole boyfriend of the heroine and the girl he cheats with.

Not the kind of film you’d remember a few days after seeing it, but a fun 81 minutes nonetheless.

Blurb-of-interest: Director Collins was one of the co-writers of Night Warning.

tagged with slasher, slasher films that aren't supposed to be funny but are funny