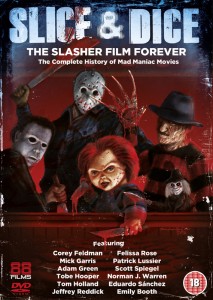 SLICE AND DICE: THE SLASHER FILM

A documentary about slasher films is pretty much all you need to know, but unlike 2006’s Going to Pieces, this one didn’t start life as a book, however, one of the associate producers is Justin Kerswell, who wrote Teenage Wasteland so it sort of counts.

Reviewing a documentary is difficult as there’s no plot to describe. Therefore, Slice and Dice is a pretty skimpy 76-minute trip through the beginnings of the genre, final girls, gore, and what makes a good maniac – not quite ‘the complete history’ as the cover claims.

As a mild distraction, there’s absolutely nothing wrong with the final product as it sails through its subject matter with a very generous scoop of films clips from all over the place, but I found it to be a little… empty and ‘inside the box’. Not that it’s slapdash, but it has a slightly mechanical feel over that of an out-and-out passionate love letter to slasher films.

There’s also a fair wad of time doled out to series’ that I wouldn’t have lumped in with the likes of Jason, Freddy, and Michael Myers (Puppet Master!?) and little in the way of history lessons. Of course, to my twisted, overloaded brain, there’s no new ground to be covered so perhaps it would be more interesting and surprising to the more casual or new fan.

tagged with after they were famous, Friday the 13th, Halloween, I love Jason, Nu-di-ty, one two Freddy's coming for you..., Scream, slasher, star power, the 80s, TV