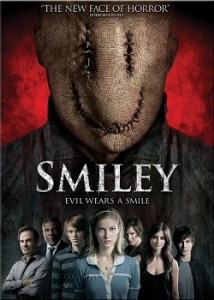 “Over 30 million trailer views” boasts the UK DVD box. Fine, but there’s a Justin Bieber song that has had over 917 million views – does that attest to the quality of his “music”?

Given this claim, it must be doing something right and, as the disc began a-whirlin’ in my DVD player, it looked like Smiley could “do a Mask Maker” and surprise the hell outta me by being, y’know, awesome. “But 2-and-a-half stars!” you say, “it can’t be that good?” ‘Tis a tale of woe, that be true… One that unfortunately must contain SPOILERS to convey the emotion found in this yarn.

Bloody Mary, the Candyman, Madman Marz – say their name any number of times and something bad will happen. So go the respective urban legends, why not add Smiley to that motley crew? How about because it’s all a big cheat… 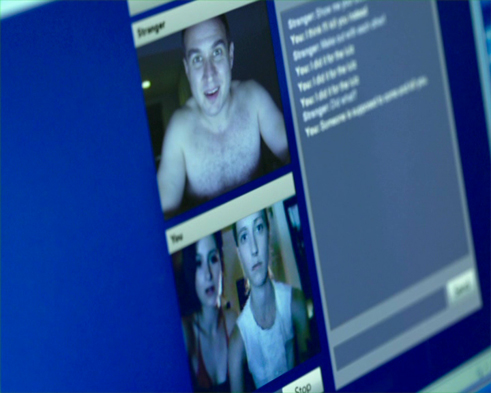 So goes this cyber-myth, log into any old chatroom – preferably one with a cam-to-cam facility – and engage in chatter with a stranger. Type “I did it for the lulz” three times consecutively and Smiley will pop up their end and KILLIFY THEM!

‘Lulz’, for those grammar pedants among us, is cyber/text/Twitter slang for ‘merriment’ usually at the expense of another. Why and psycho would latch on to such poor spiel is a mystery the film refuses to investigate. Why not ‘I did it for the jollity’ or the ‘gaiety’?

Anyway, this befalls the usual teen babysitter and, in another place and time, college girl Ashley (Gerard) moves into new digs with perky roomie Proxy (Papalia), who introduces her to a group of anonymous web-pranksters and their quirky brand of humour, including the legend of Smiley, which nobody knows to be true or not. 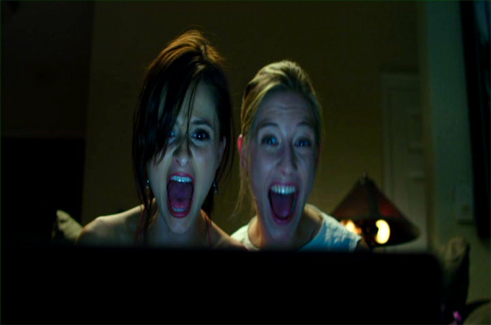 Ashley soon begins seeing Smiley everywhere. Nobody believes her kerr-ayzay story and repeatedly tell her to forget about it and not tempt fate by snooping. Her ____ teacher (Bart), fills his students’ heads with all sorts of theory regarding higher intellect and the possibility that we create our own fate yaddah yaddah. All of this influence begins driving the girl mad and, when members of the anonymous group begin dying, she tries to convince the cops of the legend (see Laughter Lines).

Eventually, Ashley decides the only way to stop Smiley is to have him summoned to her, so she gets Proxy to, over a video chat, type ‘I did it for the lulz’ and face her fate. 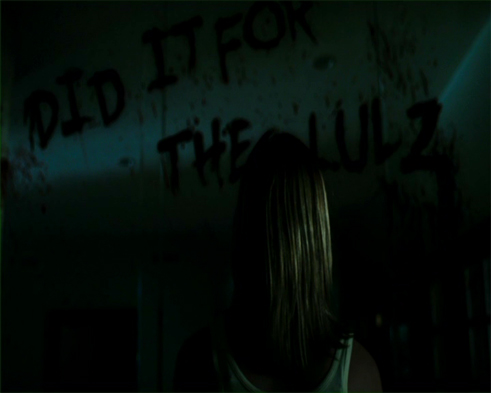 Didn’t this gag used to read “Aren’t you glad you didn’t turn on the light?”

But no. Smiley comes. Then more Smileys. Ashley takes a fatal dive through her window and they all unmask themselves – the anonymous web people. It was all some social experiment-cum-joke that they hoped to spread over the net.

If you’ve seen Cry_Wolf then this outcome will be totally new territory, only here it’s even more annoying because, up to this point, Smiley was a pretty good horror film, kinda like Candyman Jr: The College Years, all meta’d up with ATRL/YouTube-speak and a post-Scream 4 “I just want to be known” vibe on behalf of the horrible group of students we wish would DIE!

Naturally, the last-second twist is that the legend IS real after all, nothing anybody with half a brain wouldn’t have seen coming. 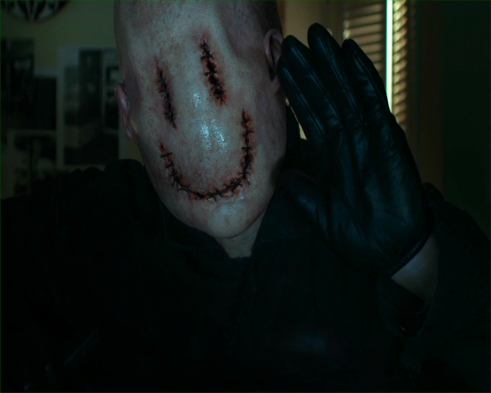 A real disappointment of a project in the end. Whatever social comment was trying to be made is ruined both by the unpleasantness of the characters and their cruelty, and then re-ruined by the stupid second-twist. Essentially it’s saying “It’s not real! The horror is made up because people are gullible! Oh no wait, it IS real now!” and then not punishing the whole lot of them.

Two stars are for production quality and some performances and quirky dialogue, another half for being interesting enough for the most part. All other stars were lost somewhere in cyberspace. Yeah, ha ha, I’m funny – must be that I did it for the lulz.

I did it for the lulz.

I did it for the lulz.

tagged with death on campus, get your own ideas!, slasher, spoilers, weird-ass twist, what the hell!?