The Ghost, the Teenagers, and the Mute Albino Rail-Spike Killer 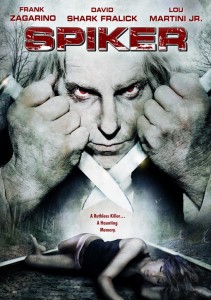 “A ruthless killer… A haunting memory.”

Dire-logue: “I’d rather screw a porcupine than touch your spooky ass!”

Adam Brandis, the Spiker serial killer, who murdered 27 Long Island locals with railroad spikes, is being transported from one joint to another when he fakes a seizure and leaps to freedom off the cross-pond ferry, taking out a few local cops as he goes.

The Sheriff thinks he’s dead but with 78 minutes remaining, it’s fairly likely that he isn’t. Oh look, there he is now, emerging from the water to kill some lineless schmuck working by the docks.

Sometime after, three teen couples actually in their cheerleader / football kits rock up to an old house owned by nominal final girl Lisa’s aunt, Elizabeth Shaw, who died the day Lisa was born – killed by the Spiker. They host a seance, dance to crap R&B music and pair off until Lisa sees a face at the window. “Maybe it was a raccoon,” one of them supposes. Again, Spiker is set in an alternate reality where slasher movies never existed.

Brandis, the Spiker, a tall, Scandinavian looking mute Albino, meanders through the woods clanking his trusty weapons together every time he appears for the time being, making it to the house to start trimming the cheer squad. Lisa finds letters from her dead aunt, which indicate she was Spiker’s lover at some point, sees a ghost bride, overdoes the heavy breathing when scared etc.

While it’s an undeniably limp affair, Spiker held my attention effectively enough and there was a halfway decent scene where one mortally wounded victim is slowly crawling towards the others, who are talking in the foreground. But what’s with the other dude who keeps cropping up with cryptic gibberish and is immune to the horror? Why does Brandis have a bottomless supply of rail spikes when he leaves so many sticking in various corpses? Where is he getting them from!?

tagged with Nu-di-ty, slasher, slasher films that aren't supposed to be funny but are funny, what the hell!?, who finances this crap!?