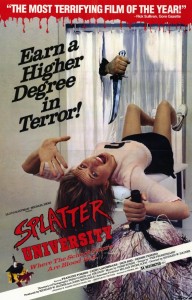 “Where the school colors are blood red.”

Laughter Lines: “The killer is obviously a psychopath and cannot be reasoned with.”

With a title like that… Well, what? It’s clearly going to be crap if it has to try so hard, right? Witness the trailer that compares it to The Texas Chain Saw Massacre! A prime example of how much the slasher genre was cheapened after the 1980-82 peak.

Film in general doesn’t come much more difficult to watch than Splatter University, a horrible Troma-associated collegiate stalker in which a maniac with shiny black shoes stabs and slashes a number of female students at St Trinian’s College. Yes, really. 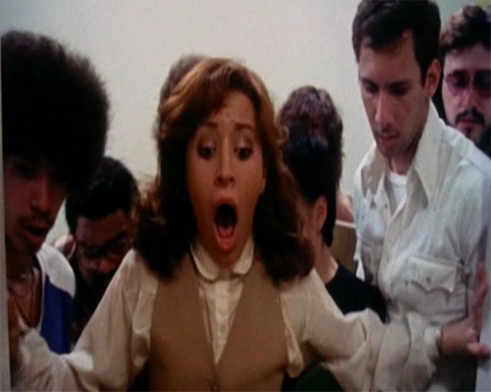 New teacher Julie (Forbes), who replaced the killer’s first victim, attempts to find out who is doing away with her class. Could it be one of a number of creepy of priests who teach there? Or handsome colleague Mark? In truth, it’s unlikely anybody will care as there’s so little to encourage you to give it your full attention. I’d recommend doing a jigsaw, sewing, organising your taxes or something while you watch.

What sucks most about Splatter U is that the script wastes time and energy developing several of the girls’ dickhead boyfriends, none of whom are interested in anything but sex and aren’t the least bit traumatised by the deaths of their girlfriends – and not one of these assholes so much as encounters the killer, let alone gets what they deserve! Instead, girls are done away with at will in punishment for their very being, or so it seems when the killer finally mutters something of a motive. 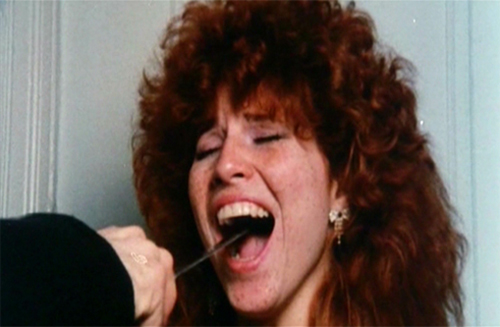 Things end on a spiteful note with Julie herself becoming the final victim, annoying as she was the only tolerable character and semi-competent actor in the whole production. A suckfest from start to finish, but kinda funny in the way that only the mid-80s could be, with some eye-melting hair-don’ts and regrettable fashion faux pas’.

I can’t really recommend Splatter University without thinking I’ve transgressed some public health order, but it’s strangely well known in the genre, even got namechecked by Randy in Scream 2, so something about it must be right… I just couldn’t possibly tell you what that might be.