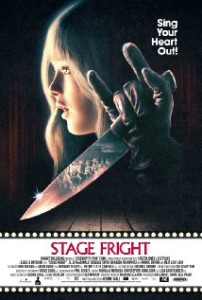 “Sing your heart out!”

The third (possibly fourth) slasher film called Stage Fright, the concept for this alone virtually had my spraying my shorts with anticipation: A killer stalking a musical theater summer camp! A MUSICAL THEATER SUMMER CAMP! If you want nothing more than to see the Glee kids to die, this might go some way to quenching that bloodthirst.

Things begin curiously like The Clown at Midnight, with stage queen Minnie Driver moidered in the dressing room by a masked assailant after a performance of The Haunting of the Opera. Her two young children, Buddy and Camilla, and lover Roger (Meat Loaf) survive her. 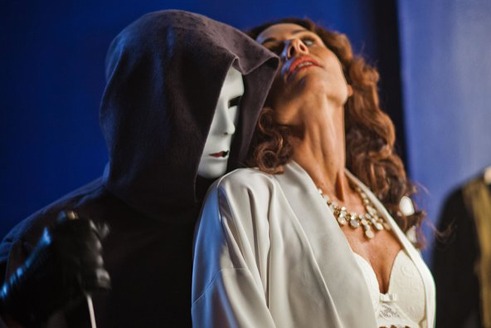 A decade later, Roger’s summer camp, Center Stage, attracts a bus full of excitable teens who sing about their arrival, being themselves etc: “I’m gay, but not in that waaaay” vs “I don’t get hard at T&A”. It’s chucklesome, but the tune isn’t memorable enough to have you humming it all day.

Camilla and Buddy, kitchen workers at the camp, want to move on with their lives, but then the season’s choice production turns out to be a Japanese-themed take on The Haunting of the Opera, and Camilla – looking like Mary Elizabeth Winstead – cannot resist following in her mother’s footsteps, ultimately winning a share of the lead role, with bitchy contender Liz. 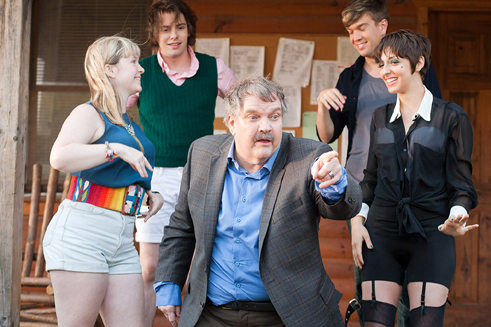 A good 40 minutes of rehearsal wastes the chance of building any characters up: We learn few names, even less about the main players, and the killer barely registers, occasionally seen toiling in his subterranean dungeon, wallpapered with headshots that enrage him. Eventually, he pops up and kills somebody the day before opening night, sparking hysteria until Meat Loaf sings a song about the show having to go on.

Campers are convinced and Camilla takes to the stage while the killer begins eliminating various cast members and crew in the wings, but this is all occurs in about ten to fifteen minutes, is devoid of any stalking thrills or much bloodletting, and yields to a protracted unmasking ceremony where the obvious lunatic goes through the usual spiel of motive, all the while the stage show is crumbling… 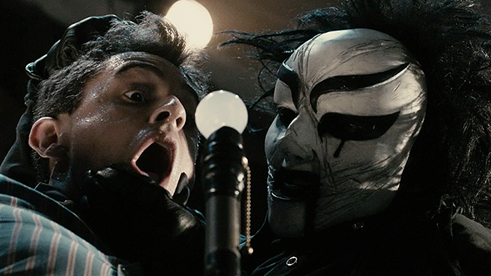 First off, I don’t hate musicals. I’m by no means a fan, but I find them inoffensive. And Glee was good for about half a season. Meat Loaf, I love. Summer camp movies, I really love. So why does this fall on its ass so hard?

Simply put, it can’t seem to decide which of the two genres it wants to be more: The musical side of it frequently crosses into cringeworthy with no major ensemble dance pieces or memorable songs that drive the plot rather than reflect it; the horror side of it is stuck firmly in second gear.

A mix of 2003 musical theater camp movie Camp and Sleepaway Camp is how it should feel, but too much time is lost on third-tier plots like the sleazy teen director trying to get into Camilla’s pants, or the repetitive rehearsal montage. The characters were boring archetypes, the killer’s identity plainly obvious, and the tacked-on “X years later” prologue completely superfluous.

I’m depressed at how off target this ended up. Now I’m off to put that song on repeat till I feel better. 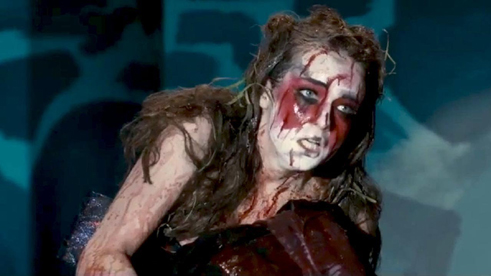 Blurbs-of-interest: Meat Loaf was in Wishcraft; Douglas Smith was in Santa’s Slay.

tagged with after they were famous, obvious identity of killer, slasher, star power, summer camp, what the hell!?