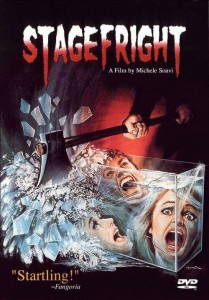 “The theater of death.”

Dire-logue: (cowering victim to chainsaw swinging killer) “I’ll do you a deal… you leave me alone and I’ll leave you alone, OK?”

I really need to seek out StageFright again someday. It’s probably worth more than three stars.

Anyway, based on what I do remember many moons after I saw it in the age of big box ex-rental VHS tapes, young stage actress Alicia (Cupisti), injures her ankle, she’s taken to a nearby psychiatric hospital to get it checked by a doctor. High-profile psycho loon Irving Wallace breaks out of his cell at the same time and hides in the back of her car, getting a ride back to the theatre where she’s just been fired from an all-night rehearsal for a play about Jack the Ripper.

When the costume designer gets a pick-axe in the mouth outside, egotistical director Peter decides to change the play to be about Wallace (under the illusion the killer fled the scene) and re-hires Alicia out of sympathy. And locks them all in.

It soon becomes clear that Wallace is stuck inside with the cast and crew and begins offing them with knives, axes, power-drills, and a handy chainsaw – all under the disguise of a pretty creepy bird mask. This gory flick supposedly influenced Argento’s Opera and features some good, intense sequences and downright brutal demises for a majority of the cast. 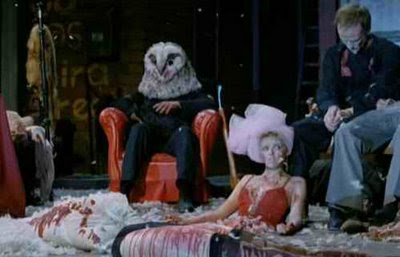 Alicia’s brushes with the killer as she struggles to find an escape route peak in a scene where she tries to retrieve the key to her escape from beneath his feet. Of course, at the end they engage in one on one combat and she prevails, but the added scene lends a most surreal slant when Alicia returns to retrieve her lost watch and the caretaker repeats the same line over and over for no apparent reason…

The only flaw is the re-recorded dubbing, which disables much of the effect of the original dialogue and, like so many European movies, cannot recapture the ‘in the moment’ performance, drawing laughter sometimes when there should be terror.

Blurbs-of-interest: Director Soavi played the role of a victim in Absurd and was also in A Blade in the Dark; Mary Sellers was also in the super-creepy Ghosthouse.