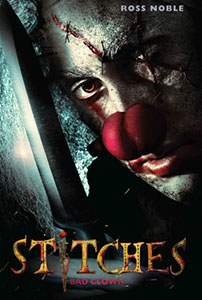 And here it is, slasher movie number 600. My therapist would have a lot to say.

Coulrophobia is the fear of clowns. Some clowns are supremely creepy, others not. But there’s always been that sinister vibe since John Wayne Gacy moonlighted as a children’s clown while burying dead boys under his house, Tim Curry’s turn as Pennywise in IT, and then those sad ones in French circuses that are as depressing as they are unsettling.

Clowns in slasher movies aren’t necessarily a new thing; Victor Salva’s quasi-slasher flick Clownhouse had three of the bastards tormenting some kids, post-Screamie The Clown at Midnight featured a particularly stupid looking one offing teens at an old theater. And now from the unlikely shores of Ireland comes Stitches…

Naff party clown Stitches appears at young Tom’s tenth birthday and suffers the slings and arrows of his guests, one of whom ties his shoelaces together, soon after causing him to lose his footing and land eye-first on an upturned knife in a dishwasher cutlery drawer – something yet to turn up in a Final Destination movie.

Guilt-ridden, Tom discovers a funeral procession of clowns after hours, who conduct a voodoo ceremony in his honour scarring the lad for years to come, not to mention putting the wheels in motion for some deserved revenge.

Six years later, Tom’s friends cajole him into throwing a party while his mother is away. Though clearly not over what happened and popping Hynocil (!) to rid him of his daily hallucinations, Tom reluctantly agrees. In a timely fashion, Stitches is resurrected from the grave and returns to the big old adult-supervision-free house in the middle of nowhere to reap vengeance on the kids who humiliated him all those years earlier. And a poor cat.

Grisly and bloody demises soon befall those who venture off alone, including decapitation, umbrella through the eye, brain-scoop and, most memorably, a case of inflated head syndrome. It’s all executed with its tongue firmly forced into the cheek, albeit it occasionally with dodgy CG effects, but they certainly didn’t hold back on the grue and every sick moment is played out with relish. Eventually, it’s down to Tom and long-time crush Kate to stop the red-nosed fiend. 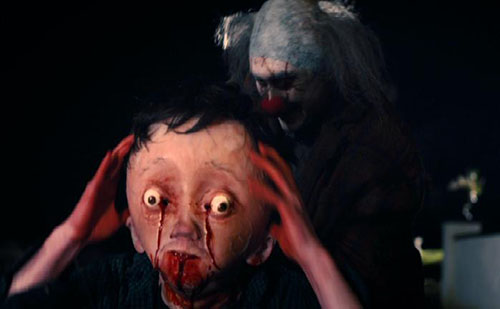 The last time the Irish riverdanced with slice n’ dice was the miserable Shrooms and, before that, Evil Breed (a.k.a. Samhain). Comedian Ross Noble is clearly having a ball with the role, spouting enough puns to give Fred Krueger a run – clearly operating under the influence of the Springwood Slasher, complete with Tom’s meds and the whole children-hunted-by-undead-guy schtick. The teenagers fulfill their contractual stereotypes: nasty girl, horny guy, perv, camp fat-ass, emo, et cetera, efficiently enough, although the script never ventures beyond these tropes. Tom and Kate are pleasant enough leads but their doomed friends almost blur into one, like a rained-on portrait of a stock slasher movie victim.

It’s a fun film, stirring up memories of Brit-flick Tormented (which would make a great double-header) as well as Elm Street, but is as shallow as it is bloody, lacking in a few explanations where they may have helped, committing that cardinal sin of allowing the character who caused the accident to live. There’s also a confusing smorgasbord of accents at play, predominantly Irish, but I wasn’t sure where it was supposed to be set.

For some unadulterated splatstick, you can’t go wrong, and while there have been scarier clowns, few are as inventive as Stitches.