Stare this way and maybe drool a bit, as it’s time to get insultingly stereotypical with
SIMPLETONS & WEIRDOS

Overview: In film world, there’s only one type of mental illness: the retarded pervert. Always male, always middle-aged, never particularly easy on the eye, these Simpletons & Weirdos fall exclusively into the red herring field. They skulk around, glare, say very little and creep teenage girls out.

But they’re never the killer. Ever*.

(*unless they’ve been corrupted by supernatural forces.)

Linguistic Snapshot: “I like teenage girls… you sure got pretty haaaaair.”

Styling: Older than the primary cast in most cases, S&W’s more often than not overweight middle-aged guys in checkered shirts wielding some kind of took used in their menial job as a groundskeeper or custodian. If they have glasses, they’ll be out of style and held together with tape; hair – if not lost – will be scraggly and far beyond the reaches of fashion. He will also have a neutral expression that is plain freaky to everyone around him.

Hallmarks: In the thankless role of the red herring / social outcast, the average slasher movie Weirdo doesn’t get much to do except lurk and suddenly appear in an empty hall, brandishing a weapon of some sort – or a mop – that makes whomever he bumps into, usually the final girl, peg it outta there in fear.

Weirdos love to appear at windows:

On occasion, this character will actually have insight that the threatened group of teens don’t. Like The Oracle, he can see the potential danger that’s closing in but nobody ever listens to Special Timmy.

Downfall: Simpletons & Weirdos don’t always die. It’s about a 50/50 chance of them ambling along to safety because the killer isn’t interested in them and nobody who counts believes a thing they say, or conversely they show up to help the final girl when she most needs it and are claimed as collateral damage. And every now and then they’ll just be done away with early on to bolster the body count.

Genesis: Unless you count Crazy Ralph from Friday the 13th, the first obvious Weirdo to have appeared was Mr Sykes, the school janitor, in Prom Night. Seen floating around in the background a few times while Jamie Lee Curtis and friends pop theories that he “spies on the girls in the locker room” and dub him a wacko. Of course, Sykes had nothing to do with it and was the first person to holler that a killer was on the loose. 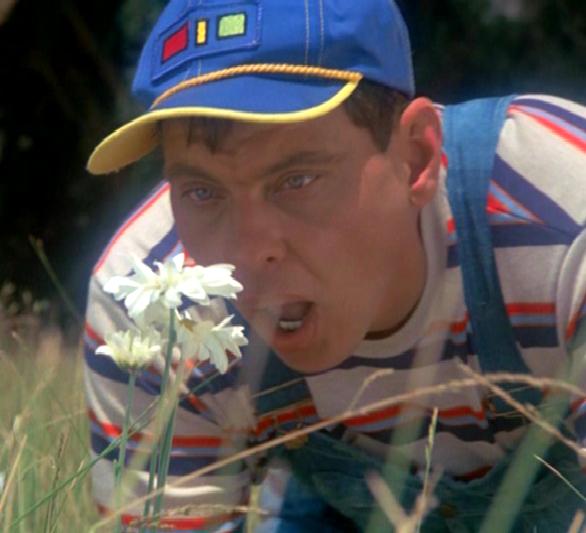 Soon after, The Prowler coughed up Otto, a hulking lurker who stepped in to save final girl Pam and was thanked seconds later by being blown away by the resurrected loon. Then 1981 TV movie Dark Night of the Scarecrow featured mentally disabled Bubba, who is cruelly shot dead by a bunch of local bigots and comes back as a homicidal scarecrow to settle the score.

C-movie House of Death coughed up Casey, a child-like, pudgy remedial who creeps around and flees whenever somebody attempts to engage him in conversation. “Oh, he’s harmless,” they all say. Even when he’s seen randomly flailing his arms at smalltown carnivals…

Worse still was Matthew in Twisted Nightmare, a Xerox of Casey, who is teased and tormented by his sister’s friends until he protests; “You’re bad! You’re all bad!” and runs off (in a supposed handicapped style) to a barn, self-combusts, and returns later as the deformed killer. 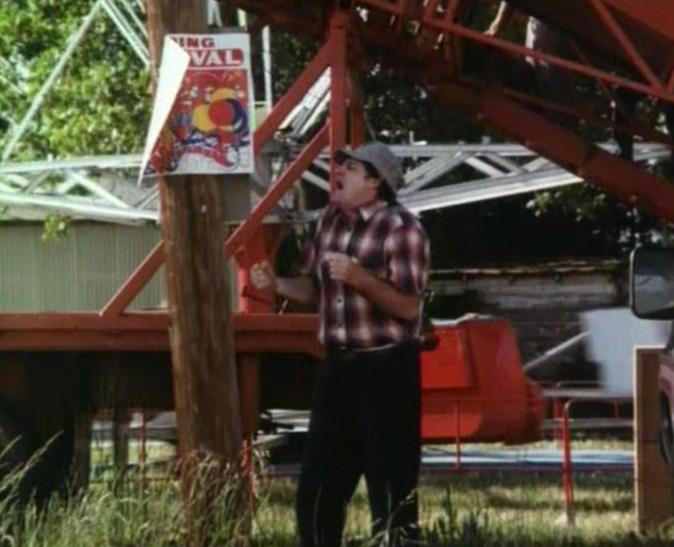 Legacy: After the initial slasher boom of the early 80s, red herrings in mystery plots became less prominent. Attitudes towards this kind of stereotypical portrayal of all mentally afflicted mercifully blotted out the need for such stupidly drawn characters. When they did appear, it was in low-end efforts (i.e. Dead Girls) that were only ever seen by 23 people.

In more recent films, Weirdos were separated from their Simpleton counterparts: the long-haired Euro-guy who watches the girls’ volleyball game in Slumber Party Massacre III (named in the freakin’ credits as ‘Weirdo’!) doesn’t speak at all and apparently only shows up to return a lost diary. But still dies.

A decade later, Natasha Gregson Wagner mistrusted society’s stereotypes and fled from a stammering gas pump jockey who she believed was trying to attack her, only to learn the hard way that he was only attempting to warn her about Urban Legend concerning the axe-toting loon hiding in the back of her car!

In Simon Says (2006), professional weirdo Crispin Glover plays identical twins Simon and Stanley, one of whom is evil and the other partially retarded. Or are they the same person playing both parts? Stanley (the simple half), is coded as a post-Forrest Gump halfwit that everybody laughs at.

Fortunately, post-modern self-awareness finally twisted the trope on its head for the farce Tucker and Dale vs. Evil, where the gag was switched and the tubby, starey, rednecks turned out to be the heroes. 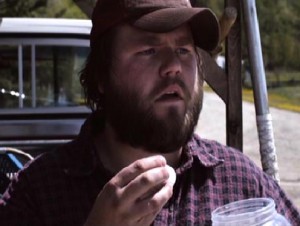 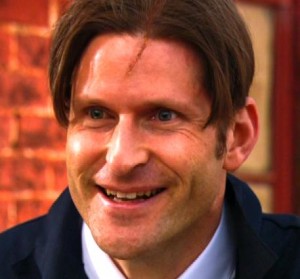 Conclusions: On a positive note, it’s good that the ill-conceived notions of mentally challenged people have faded away to some degree over the years. While doubtlessly the likes of Mr Sykes, Otto, Matthew and Casey generated and laughs and general suspicion from a generation brought up to believe that murderers looked more like Sloth from The Goonies than they did Ted Bundy, the fact that it quickly became clear that such characters were never really a danger (again, save for paranormal interference), the number of them on screen depleted and were replaced by regular looking weirdigans.

So, if you find yourself and your friends stalked by a loon, perhaps take heed of the ramblings of the local madman, he may well have insight that you don’t. But don’t be mean to them, that’s a one-way, non-refundable ticket to the boneyard.

tagged with Friday the 13th, hair don'ts, slasher, the 80s, yo! Hollywood