Overview: Murder makes the news. Multiple murders bring the press like bloodhounds and there’s always one reporter trying to get the scoop, even if it means he/she risks endangering themselves to get it!

Linguistic Snapshot: “Can you confirm or deny that the killer’s still out there and that you have the wrong man after last night’s triple-murder at the old mill?”

Styling: In the slasher realm, Snooping Reporters are more often female than not, so power suits and great hair are usually par for the course.

Hallmarks: Pushy and unrelenting, The Snooping Reporter has but one goal: The scoop. It doesn’t matter how many locals might die, in fact the higher the bodycount the better the story. They will stop at nothing to get their exclusive.

Downfall: The Snooping Reporter sometimes dies, sometimes doesn’t, and they can either be an aide or a hindrance to the final girl. Gale Weathers, doubtlessly top of the horror movie reporter tree, is a caustic, self-centered hack who is eventually instrumental in unmasking and reprimanding the killers in Scream and all of its sequels. In Pieces, the nosy journalist is savagely stabbed to, well pieces, on a waterbed; the feminist critic in Tenebrae also meets a bloody end; TV anchor Robert Campbell (below) makes the error of visiting the old Voorhees house and becoming possessed by Jason himself; student reporter Timmy has his throat cut and is shoved into a locker in Cherry Falls. 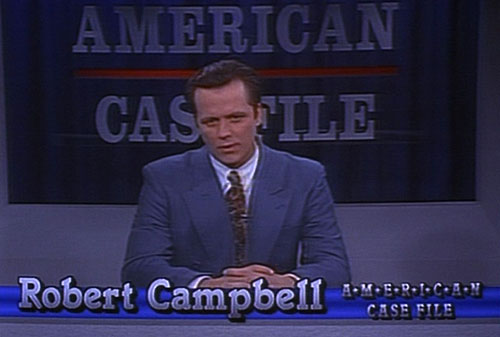 Genesis: Lauren Tewes is a TV newswoman who thinks a killer of women lives in the building next door in Eyes of a Stranger in 1980. Next there’s a brief proto-Gale Weathers character in Halloween II, who utters the awesome line “You need their parents permission to make a statement, if you can’t find their parents, get a statement anyway.” She might be the earliest incarnation of an uncaring, career-focused reporter, but is only in the film for a matter of seconds (apparently she is killed in the novelization).

The doomed journo in Pieces came next, and then Tracy, a brash, trenchcoat wearing reporter who is sure Norman Bates is still killing in Psycho III, ultimately becoming the de facto heroine. By the 90s, Barry Simms fatally decides to broadcast from the Myers house in Halloween 6.

Legacy: Courteney Cox’s portrayal of Gale Weathers in Scream is unquestionably the most significant influence on such characters. In her wake, we had Kate Winsail (!) in Australian Scream knock-off Paranoid, Paul the object of lust for many a girl at Pendleton University in Urban Legend; Taylor Gentry in Behind the Mask: The Rise of Leslie Vernon, who unwittingly stumbles into final girl territory. Reporters also turned up in the various Scream parodies.

Gale Weathers and one of her many clones.

Films like Nightcrawler showcase just how far the media might go for the juiciest story, so for the time being it’s likely that slasher films will continue to feature reporters sticking their oars in, probably dooming various local teenagers in the process. To quote the audience member at the press conference in Scream 3: “Are you saying we should go out and cut each others throats because that’s what you did?”

tagged with Friday the 13th, Halloween, Scream, slasher, the 80s, yo! Hollywood