No power tools, plaid shirts, or cropped hair in sight as we enter the fantasy world of the
TOKEN LESBIANS 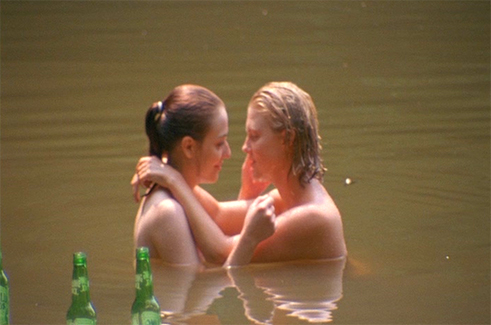 Styling: With few exceptions, slasher movie lesbians are just like any other scantily clad female cast member. This lends itself well to the fantasized “all that’s missing is my cock” outlook most of these scenes are striving for. Thus, ‘lesbians’ (or girls ‘just going through a phase’) are ultra-fem, with long flowing hair, delicate nails, and killer racks. On occasion you might see a more butch example, but it’s a surefire bet she won’t be in a sexual situation, will be aggressive, and will thus die as she’s of no use in any fantasy. 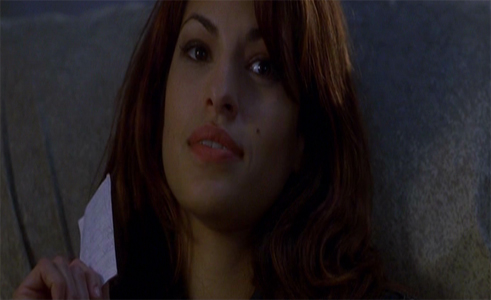 Hallmarks: Every now and then, one of the lesbians (never both) will become the final girl. For the rest, it’s nothing but nymphette behaviour alongside other regular character traits, they stand out only in their choice of bedfellow and everything else is a through-the-motions affair. On occasion, one of the lesbians will be a little closer to the butch stereotype, though still conventionally beautiful, just with a bandana and some bad language or something.

Downfall: After we’ve watched them strip off, make out, and, occasionally, do other things, our lesbian couple have little else to offer and will die just like their friends. But at least there’s nothing grimly ironic in their deaths at least, no dildo-impalement or ‘corrective’ procedure involving a bigoted psychopath.

Genesis: The earliest lesbian representation in the genre appears to be the neo-heroine of Class Reunion Massacre (1976), who outlasts most of her heterosexual (and one effeminate gay fella) buddies, but still dies at the end because she is “a sinner” along with the other victims. Shadows Run Black featured an unattractive, overweight lesbian – about the only victim not to disrobe – who isn’t even afforded the on-camera death the prettier, straight girls get.

Legacy: After 2000, it was no longer taboo to adorn cheap horror films with girl-on-girl (but never guy-on-guy) action, though any given film’s budget would equate to what was shown: Urban Legends: Final Cut featured Eva Mendes as ‘the suspicious lesbian’, because, of course, non-normative sexuality means that where there are secrets, there are homicidal tendencies. She keeps her kit on. French indie Deep in the Woods elected one half of its lesbian couple as final girl, while Haute Tension twisted the dynamic around and cast short-haired Cecile de France first as the heroine and then, in a last minute revelation, a dangerously psychotic looney-lezzer who slashes her way through the family of the girl she’s in love with.

Elsewhere, girls making out cropped up in The Butcher, Curse of El Charro, Voyeur.com, Bikini Girls on Ice, Hatchet, Dark Harvest, and going much further in Wrong Turn 4. Weirder still is Switch Killer, where a girl flees her abusive boyfriend and falls in love with a woman, only for the boyfriend to turn after a SEX CHANGE and stalk her! Curse of Chucky featured a sordid love affair between a married mom and her daughter’s au pair.

It’s worth noting the presence of lesbian slasher flick Make a Wish – retitled Lesbian Psycho on a later release – which was directed by a gay filmmaker, and so the orientations of the characters is more incidental, despite the presence of a few nudie scenes.

Conclusions: Are we witnessing a progression in social attitudes or just skeezy exploitation? In most cases it’s probably the latter. A majority of the titles where girl-on-girl material occurs is at the cheaper end of the spectrum, where filmmakers with next to no imagination are simply doing what they think the audience wants. It’s worth noting that gay couples of either gender fail to turn up in any of the three major franchises. 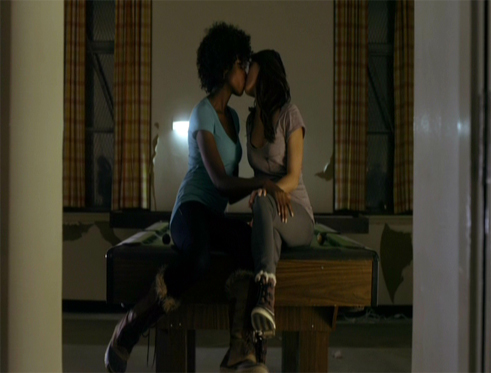 I do wonder what actual lesbians might make of it all. They’re effectively being included, albeit in a cookie-cutter manner, though it’s clear it’s purely for the benefit of a straight male demographic, which is why gay men are rarely shown in any other capacity other than enfeebled Nancy-boys. But then are heterosexual teen characters any more realistic? The more recent the film, the more uniformally beautiful and buff the cast will be: Fat or unattractive actors are also marginalized.

So, in slasherama it pretty much sucks to be anyone bar the final girl, because you’ll just be a dumbed down stereotype. Sad times.

tagged with before they were famous, Euro-horror, Nu-di-ty, slasher, spoilers, what the hell!?, yo! Hollywood