This month, be catty, yet fashionable and definitely sexless as we look at
THE UNREALISTICALLY CAMP GAY

Overview: In movie-world, minorities only ever come in two types: threatening and entirely non-threatening. In these PC-centric times we live in, gone are some of the more offensive stereotypes of gay characters, specifically men (we’ll deal with lesbians another day), where the only plausible style of representation was being a drag queen, a child molester, or a repressed psychopath. These days, it’s all about camp humour. Think Will & Grace & Ghostface.

Linguistic Snapshot: “Oh my God, girls, I tell you that killer better not come after me… Unless he’s Jensen Ackles with a donkey dick and doesn’t get blood on my Prada *squeaky giggle*.”

Styling: The camp gay man must wear tight-fitting clothes that make him appear skinny and weak. He can’t be one of the gym-sculpted Adonises that litter the scene, because they might be mistaken for REAL men and we can’t have that! No, be flaming, be stylish, be a functioning hair-gel addict. Hey, why not try make-up too? 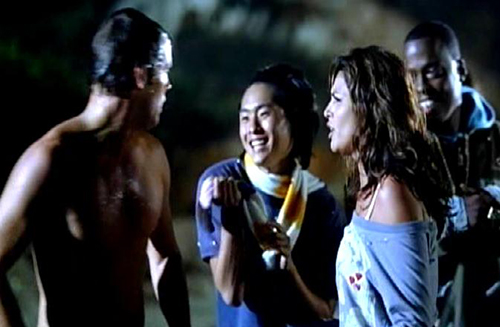 Hallmarks: After it being communicated to the audience that he is gay, the Unrealistically Camp Gay needn’t do much more. After all, that’s all that’s required on the knowledge front. All that’s left to do is hang around in the background and make occasional razor-sharp quips about the depressingly-dull romantic problems of the main boy and girl, as only THEIR love matters.

Downfall: In days of yore, UCG’s would be quite violently slashed up on screen to appease the assumed hoards of homophobic audience members who like to see “them fags get what they deserve!” While social stance may be a little more progressive, gay characters tend to hang around a little longer, neither being the first to go, nor one of the last. He is a midriff victim (possibly to complement the crop-top he’s likely to have been forced to don by the costume department).

In Venom, Ricky is summarily done in relatively early on, incapably running from the killer (remember, gays can’t run, throw, or lift weights in Hollywood) and having his arm ripped off; super-camp Latino-gay Shawn of 7eventy 5ive, miraculously gets laid by a hot cowboy (an unlikely pairing, but, y’know, gays will do anyone) before almost literally running into the killer’s blade; Fame-dancing Asian-gay Ricky (double minority points!) from Hack! attempts ill-advised martial arts on the killer and is, instead, gunned down. Finally, Timmy, student of Cherry Falls High School and victim of evident high-velocity collision with the Boots cosmetics counter, is afforded an off-screen throat-slashing as one of the primary virgin victims. 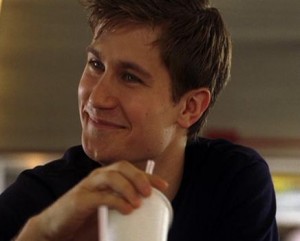 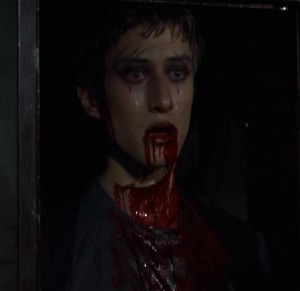 Genesis: Early slasher movie gay characters were far more commonly found in red herring roles, suspect because of their “deviant” sexual preferences, that, naturally, go hand in hand with psychotic breaks. One early example, though more incidental than intended, was Radish in Final Exam. Whether the geeky character is supposed to BE gay is a mystery, only Joel S. Rice’s performance at least APPEARS angled towards being the fag for heroine Courtney’s hag. He survives most of the film, is picked on by the macho jock-types, and done in when he tries to warn Courtney of the impending danger.

In the curiously named Canadian export American Nightmare (!?), Dolly the transvestite is the sole “male” victim of a razor-toting loon, who encounters him earlier while escaping and yells a hateful remark in his direction, then later returns to finish the job.

Lastly, and most infamously, is boy-hero Jesse in A Nightmare on Elm Street Part 2: This much analysed entry in the series had an intended subtext of homosexuality, as Freddy Krueger literally “came out” of Jesse’s body at various points to kill schmucks. Eventually, Jesse is saved by the kiss of a girl; hetero-trumps-homo and saves the day. Those who criticise the film for it’s “pro-gay” material are clearly uninformed on what “pro-gay” means… Elm Street 2 doesn’t have much positive to say on the subject. Just check out that S&M-fused gay bar Jesse coincidentally wanders into… 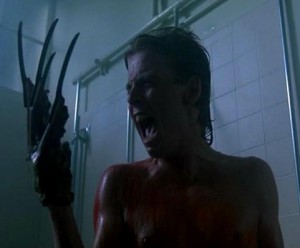 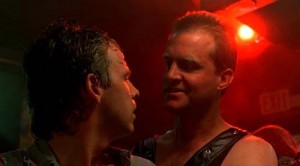 Legacy: In Scream 4, Charlie and Robbie make a point of stating that, in their “rules reversed” theory of modern horror, that the only way to survive a scary movie is to be gay. Nice idea, but yet to be seen in practice.

Until that happens, we stand and watch as gay characters become slightly more evident in the genre, ideally less camp and annoying, and aren’t written as pathetic cowards either.

The gay boys in Bride of Chucky, Venom and The Clown at Midnight are, at least, far more incidental in terms of their sexuality. None of them are able to demonstrate anything on screen, merely colour their hair with peroxide, engage in short-lived conversations about not being straight, and, of course, die summarily.

Elsewhere, gay-produced slasher HellBent may have been largely set in a West Hollywood gay club, but it presented characters of varying campness, from the muscle guy who regrets dressing in drag for Halloween, to the testosterone hemorrhaging sex-pest, and the more sensitive final guy. 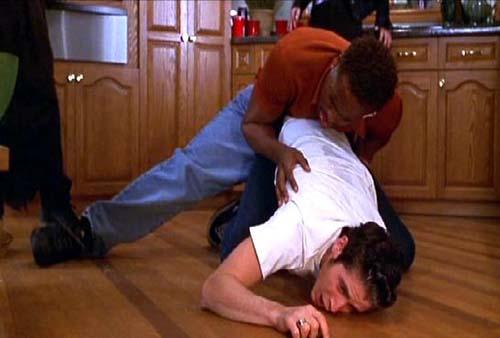 In Scary Movie, the revealed killers are made up of a closet gay teenager and his friend who allows him to suck cock, but who has been the subject of endless gay visual gags throughout the film, culminating in their har-de-har-har ‘position of death'; slumping into a butt-fuck position.

Conclusions: Sadly, it’s still widely believed by the people that produce slasher movies that the audience is strictly limited to heterosexual men interested only in seeing girl-on-girl action when it comes to intonations of anything-but-straight sexualities. The sheer number of fansites, blogs, and even books on horror written by gay men is staggering, what the draw of this largely unsympathetic subgenre is remains to be made clear, perhaps the sense of “outcast-ness” shared with the likes of Laurie Strode or seeing the popular (and probably nasty) kids laid to waste are among viable reasons.

Anyway, we wouldn’t have gotten Hellbent in the 80s (Cruising sure don’t count), so tropes are morphing and changing all the time and, perhaps Charlie and Robbie’s reading will be made fact in the not so distant future. 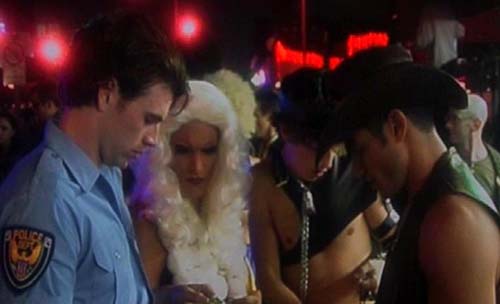