Valley of the Cheapjack Franchises: Stripped To Kill 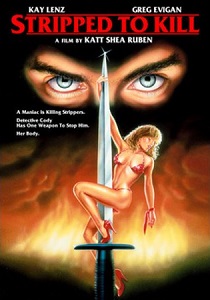 “A maniac is killing strippers. Detective Cody has one weapon to stop him… Her body.”

Laughter Lines: “I’ve never seen any body jack off a snake before!” / “She’s stressed – I’m giving her a massage.”

The concept of an attractive female cop going undercover as a stripper to smoke out a killer of dancing girls sounds as old as the hills in 2019, but Stripped to Kill was possibly the first film to make use of the cliche. Minor spoilers follow (though the trailer totally gives away who it is anyway).

Reportedly, female director (!) Katt Shea (who played the toilet victim in the previous year’s Psycho III) wanted to explore the artistry of exotic dancers more so than just ogle them – as most of the subsequent films with the very same plot did – and so there’s more character depth going on here than in, say, Slashdance or PrettyKill, with various girls struggling with drugs, ageing, as well as the voyeurs who come to throw bills their way.

When Detective Cody (Lenz) literally runs into a stripper being murdered, she and hunky partner (Evigan) concoct an undercover mission for her: She enters a stripping contest and is given the job of the dead girl at the Rock Bottom club while she investigates the murder and the disappearance of another girl. 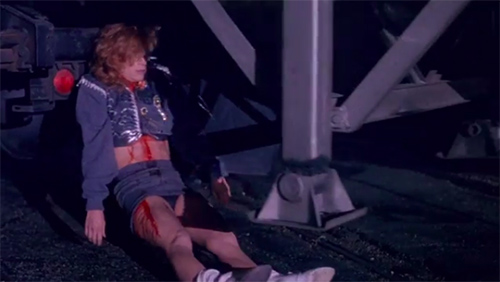 Could it be headphone-wearing weirdo Mr Pockets, who’s always giving the girls paper flowers? Frustrated owner Ray (Fell, of Three’s Company!)? Or someone closer to home? Hmm… Stripped to Kill blunders along a bit lifelessly for the most part, with few stalk n’ slash sequences, but is elevated by the camp-as-tits final act, which shares a fair whack in common with a few other notorious slasher flicks as well as a total lack of political correctness – let’s just say if you wanted The Further Adventures of Kenny Hampson, here it is.

Shea’s attempts to humanize the girls is 50/50 successful – a scene that infers they all look out for one another is nice if fleeting. Star Kay Lenz later complained about the sleazier aspects in the final cut, which pushed the focus to tits and immolation. Watch out for the sarcastic receptionist, Shirl. 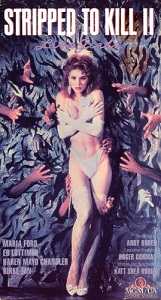 Making its predecessor look like Dressed to Kill, It’s difficult to get your head around this hot mess being written and directed by the same team as the first one, which, while no masterpiece, at least looked decent. Director Katt Shea wrote as she went, with no clear direction, and thus Live Girls is the wretched product.

LA stripper Shady (Ford) has crazy 80s-music-video dreams with lots of dancing that end with vampire-esque razor-mouth kisses, all of which preclude the murders of the other strippers from her club who cameo in each dream.

Limping detective, Sgt. Decker tries to find the killer, falls in love with Shady, and, well that’s pretty much it. It takes forever for more murders to occur and, gasp, it’s the one with the British accent! Who knew!? She loves Shady too, or something. A real damp squib of an effort which, even at 78 minutes, feels like it robs you of an entire day to sit through.

Blurbs-of-interest: Maria Ford was in Slumber Party Massacre III; Karen Mayo Chandler was in Out of the Dark.