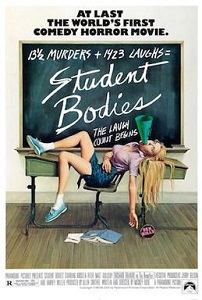 A killer known as The Breather, who wears squelchy galoshes and talks through a rubber chicken, is offing the sexually active couples of Lamab High School, using eggplants, paperclips, and various other bizarre weaponry. Goody-goody heroine Toby is determined to find out who it is before any more of her friends end up dead.

Many-a-joke about farts, erections, urinals, but little to say about the contemporary slasher film trend, bar the first few minutes. Ultimately it knifes itself in the foot with bizarre dream sequences and a really, really confusing ending, plus the feeling it thinks the audience is pretty dumb.

Pandemonium remains the best parody of the era, but at least Student Bodies can declare itself superior to Wacko and National Lampoon’s Class Reunion.

tagged with death on campus, the 80s, weird-ass twist, what the hell!?