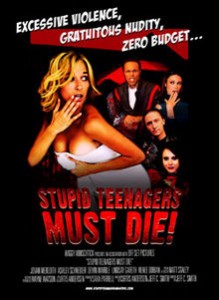 Another one to ‘thank’ Phil M for…

Winning one of those frankly generous two stars for its title and the first title card, which reads: “Long time ago in a time of pure evil…” and, after a few seconds, adds: “The 1980s…” Stupid Teenagers Must Die! is plausibly the worst made film I’ve sat through, though my recent ordeal with Horror House on Highway Five could well rival it.

In spite of the sub-camcorder quality look and that it doesn’t remotely resemble anything from the 80s, STMD! is more of a diary of fun on behalf of the cast and crew, who at least put some effort into a few lines of dialogue and lampooning dead-teenager film cliches.

There’s not much to tell; several high schoolers gather for a seance at the home of Murder McGee, who slaughtered his family years earlier. They do something wrong because one by one they are possessed and start to kill each other.

It’s as stupid as the characters, with that increasingly annoying hot lesbian thing crowbarred in YET AGAIN, rubbish acting, direction, production, and sound. But it’s like watching your old school friends’ attempt at a movie years after they made it, so credit where it’s due – they at least tried to do something fun.