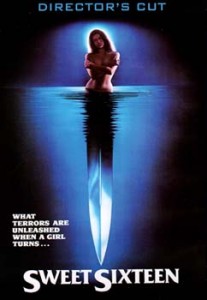 “All the boys are dying to meet Melissa.”

Laughter Lines: “What if that killer is waiting for us? We could be coleslaw just like that!”

A strange mess of a mystery pic, somewhat forebearing All the Boys Love Mandy Lane, this was delayed from its 1981 production until a release in January of 1983, by which point Dana Kimmell had graduated to the ranks of Friday the 13th final girl-dom, which possibly aided its eventual unleashing.

But check out that cast! Hopkins! Strasberg! Macnee! Pataki! And Don Shanks who played Michael Myers in Halloween 5 and, less impressively, the fisherman in I’ll Always Know What You Did Last Summer as a local Native American laborer and convenient red-herring.

Promiscuous teen Melissa Morgan (Aleisa Shirley) is new to town for a few months while her dad (Macnee) excavates a local reservation. But the boys who fall at her feet have a habit of showing up knifed to death sooner or later – is Melissa the one doing it? Or does somebody else in this dusty lil town harbour a dark secret?

Bo Hopkins is the local sheriff and Dana is his mystery-obsessed goody-goody daughter who keeps finding bodies and somehow immerses herself into the centre of things in true Angela Lansbury fashion. They, and her brother Hank, are all annoyingly cute. So much so they keep saying “don’t be cute”, “no, you’re being cute,” and various other variants thereof. After the 43rd time Kimmell says it, I wanted Jason to appear and lop off her head as promised. 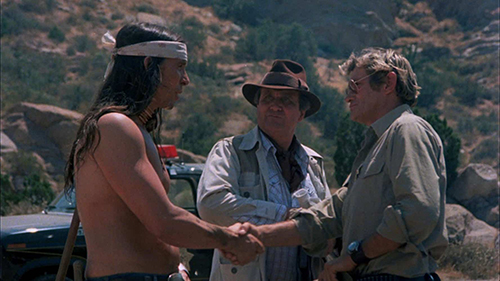 She’s initially jealous of Melissa, blames her for a death and calls her a selfish bitch, then five seconds later is her new BFF, one of many topsy-turvy things the film throws at us.

Despite all of the victims being male in accordance with the wackadoo’s motive, Sweet Sixteen doesn’t shy away from its skeezy elements, showing the apparently 15-year-old Melissa full frontally nude in the shower. Yes, the actress was of age, but still… you’re pretty much asking the audience to believe they’re perving over a minor!? Kinda gross. 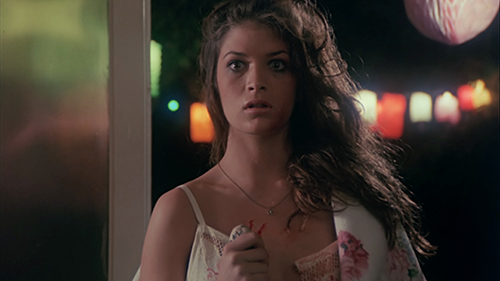 The identity of the killer is no great surprise and a strange afterthought of a motive is revealed at the same juncture; It’s functional but, like the film as a whole, not especially interesting beyond a rather exceptional cast roster.

Blurbs-of-interest: Hopkins was also in A Crack in the Floor and Uncle Sam; Michael Pataki was in Graduation Day and Halloween 4; Susan Strasberg was the teacher in Bloody Birthday; Don Shanks was also the coach in Urban Legends: Bloody Mary.