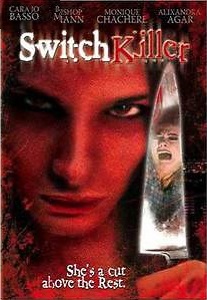 Laughter Lines: “You gonna tell me you don’t wanna take a stab at this body?”

Poor Jamie (Basso) flees LA and her abusive boyfriend for the bright lights of Vegas, wherre she finds word as a pole dancer and falls in love with another woman. Six months later, boyfriend turns up looking for her, but his obsession has spilled over to the point where he’d had a sex change in order to try and win her back!

In the meantime, he/she stabs anybody who stands between them, mostly her topless colleagues and a few witless partygoers, all taking place on New Year’s Eve.

There’s little more going on than back to back setups for each kill in this cheap looking video flick from the director of Mr Ice Cream Man, which was a pretty weird film itself. Insubstantial writing also results in end credits that grind on for sixteen minutes as they recall the highlights of the film and some behind the scenes footage nobody wanted.

Hail has a good knowledge of the genre and he’s able to polish the film enough to make it passably entertaining, but it walks a thin line between exploitation and downright misogyny and transphobia, with overlong sequences of lap dancers in faux-lesbian acts in a sleazy club.

Blurb-of-whatever: Mack Hail had a role in Carnage Road.