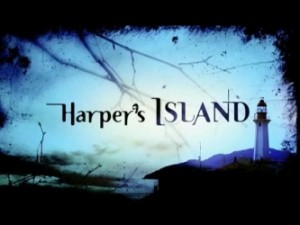 Now this is something you don’t see every day month year ever, a TV slasher series. Messiah kinda dipped its toes into the water, but Harper’s Island appears to be – on the evidence of the first episode – an out n’ out stalk-a-slash-a-hack-a-kill-a-thon.

OK, so episode one, entitled Whap, wasn’t actually that engaging, but it was adequate enough to beckon me back like some strange noise I heard coming from the shed one rainy night…

The titular island is reportedly 37 miles off the coast of Seattle where some dude killed a dozen or so people a few years earlier. It’s also the place where loved-up younguns Henry (guy who played, uh…Henry in Ugly Betty) and Trish (Katie Cassidy from the Black Christmas “remake”) want to get married and so invite their respective family and friends for the occasion, which looks like it’s going to take more than a couple of days. Good luck getting time off work.

Amongst the attendees is Abby (Elaine Cassidy – who reminds me of Maddy from Friday the 13th Part VII), whose mom was one of the murder victims and who hasn’t returned to Harper’s Island since. Read: the final girl. She’s Henry’s friend from childhood. Trish’s family are mega-super-rich and her Dad (Richard Burgi) doesn’t seem happy about her betrothment (!?) to former yacht-scrubber Henry and might have plans to ensure the wedding never happens.

Never mind mate, someone’s already trimming the guest list – bwa-ha-haaaa!!! Yes, the uncle who never shows is strapped to the propeller shaft beneath the boat that takes the group to the cursed isle and so goes head first into the blades as they launch – and of course, on a boat taking some forty people out to sea, not one person looks over the stern and says “ew, Cindy, like where did that blood come from?”

Various characters are introduced, who range from witless guests, family, a creepy-ass kid, evident red herrings, island dwellers who all know about Abby and one totally off-screen serial killer who dispenses with another poor schmuck before the end of the episode. It’s frankly too soon to guess who or even why, but you can bet your ass it’s something to do with the murders of olde and the rich family. We shall see… uh, unless it gets cancelled as Stateside it’s already been shifted to a rubbish weekend night slot. However, as all thirteen episodes have been shot, hopefully it’ll play out. 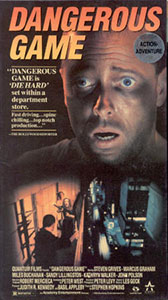 “When a crazed cop goes shopping for terror…”

A super-rarity within its own genre: the slasher film that isn’t. Sort of. April Fool’s Day kinda meets the criteria, and the godawful Granny. But what of little known Australian export Dangerous Game, eh? Yeah, what of it!

Grives is an unhinged cop sporting a dire Irish accent and is conveniently named Murphy. For kicks, he likes to torment his former superior’s son and, when his penchant lands him suspended, he goes a little wacky and stalks said kid and four others to a department store they’ve broken into for a dare with the intent of pinning a B&E on them and regaining his position.

When he accidentally kills one of the kids, his id proposes he kill the other four and burn down the joint to save his own ass. However, rounding them up isn’t so easy and they fight back with veritable gusto. Where Dangerous Game deviates is when we learn that Murphy’s conscience won’t allow him to kill them and he ends up being the one hunted.

Much is borrowed from the likes of Hide and Go Shriek and The Initiation by way of Maniac Cop, but proudly showing off its Australian-ness with some truly horrendous fashion errors (braces and a yellow shirt – ugh!) and hairstyles. Despite the body count of one, there’s a slasher stamp all over this, with tense chase scenes and well written characters who react convincingly to the death of their friend. Killer cop Murphy even attempts to resuscitate his victim and reasons that the youngsters haven’t experienced enough horror in their lives (clothing choices aside). An intriguing diversion from the usual formula from the director of A Nightmare on Elm Street 5.