Do we know much about the culture of Norway, that slab of land that stretches from the North Sea up near the Arctic Circle? With no means to cause offence, the country isn’t famous for a helluva lot. Images immediately conjured up when one thinks of the place include herring, fjords and limited daylight hours.

Worry not, for this rather drab portrait can only be brightened by the fact that the country produced one of the most atmospheric slasher pics in recent memory, which also teaches us Norway has a lot of snow and therefore skiers and such. 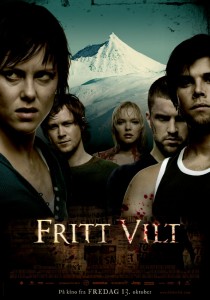 Yes, Contender #1 is Cold Prey, or Fritt Vilt as shown here, the super high-tension cloud-of-dread neo-masterpiece of teenkill horror that pitts five stranded snowboarders against a fur-clad primal killer when they are forced to spend a night in an abandoned ski lodge. This rivals Haute Tension for the crown of most nail-biting stalk n’ slasher so far this century – but doesn’t have the same dumb twist.

Moving from the fjords and herring of Norway to the once great shores of Great Britain, but a pebble’s throw away to meet Contender #2, our very own Coldplay. 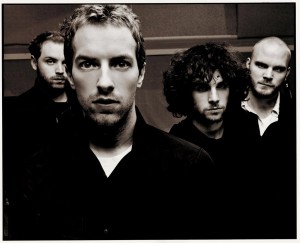 Now, Coldplay emerged on to ‘the scene’ several years back, shooting to fame with an endless array of drippy ballads such as ‘Yellow’ and ‘Clocks'; the kind of songs that, if sung by, say, Alanis Morissette, would have been minor footnotes in the British charts and likely criticised for being too whingey and whiny. But when you’re a quartet of blokes with a conventionally handsome leading man, you can moan all you want and Radio 1 will kiss your feet and declare you the best band ever.

Can you tell who’s going to win yet?

Coldplay lean towards pianoey ballads with poetry-like lyrics and a lot of metaphors.

Originality: We’ve seen Iced and Shredder so we know that 80% of the primary cast members are no longer going to exist after 95 minutes.

Jo Whiley said Coldplay had a ‘definitive sound’. This actually meant that Speed of Sound was a carbon copy of Clocks and she didn’t want to look stupid by endorsing them after moaning for so many years that most pop groups’ output ‘all sounds the same’.

Violence: Make no mistake about it, Cold Prey gets brutal when it wants to. The first kill is especially terrifying (not least for the victim), but after this there’s no excessive bloodshed.

Listening to Coldplay may well induce outbursts of homicidal violence.

Leader: Jannicke is the sensible, kind final girl in Cold Prey. She loves her boyfriend and is nice to Morten, the dude who’s had the Jones for her since, like, forever. She kicks the killer’s ass when necessary.

Chris Martin seems like a nice fella, but bland, mind. Does anybody know the names of the other three?

Outcome: Cold Prey ‘borrows’ heavily from a scene in Hostel for it’s finale, but I was literally screaming at the TV for Jannicke to do what a (final) girl’s gotta do!

Spawn: Frit Vilt II is just as scary, taking the olde Halloween II route of moving both FG and killer to a near deserted hospital for further stalkage. One of those rare sequels that matches the first film’s quality. 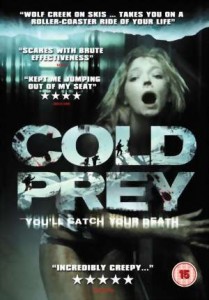 Well that wasn’t at all obvious…

“You were a child once!” quips anybody I dare express my anti-social feelings towards their Little Darlings. OK, so I don’t loathe kids, but they seem to be at the root of most annoyances in life: making horrible shriekly noises at the movies/on the bus/at the library; existing to warrant prams the size of Humvees that hog the entire pavement (soon to come with razor-edged wheels to really show those nasty adults!); and influencing their parents to shoot visual daggers your way should you dare to express facial disatisfaction at such a minion blocking your mobile trajectory or screaming so loud your ears threaten to short out…

Anyway, kids become teenagers and we like teenagers because they serve to get hacked to frack in all manner of slasher flicks, but some such films have dared explore the notion that prepubescents are just as capable of homicidal evils as much as any backwoods dwelling sack-headed psycho…

Three women go home to the town where another galpal of theirs was murdered years before for the wedding of a fourth friend – however she’s just perished in a car accident. The heroine, Claire, believes she has seen Milo, the rainmacked brat who was responsible for their friend’s death as kids. She tries to warn her pals but, of course, nobody believes her and they all end up dead. The explanation has something to do with abortions, Vincent Schiavelli, and kids who can’t grow. Can’t remember it now, but it sucked… And from the creator of Anaconda! Sold.

Somehow this film is set in Illinois despite being shot in New Zealand… Maybe one of the experiments going on at the local college has something to do with teleportation. Whatever they’re up to, they’re making the neighbourhood kids into psychopathic killers who don’t think twice about slicing up those who get in their way. A kind of pre-cursor to Children of the Corn (see below) but crossed with some sci-fi gobbledeegook. There’s a great scene where the local busy-body babysitter drops in to make a snack for an 11-year-old, only to find her charge being carved up in the bathtub by a zombified teenage girl! Bonus points for maliciously offing a kid – gotta love that.

Evilness of Children: 18% (they didn’t know what they were doing – same excuse the tabloids use.)

Three 10-year-olds who share the same birthday are evil. In my experience, most kids become quite evil around their own birthdays. “I want! I want! I want!” Here, instead of tantrums over playing statues or the guaranteed horrendous bow-tie or dress* they’re forced to don for the party, Debbie, Steven and Curtis lack certain emotions that translates into remorseless children of DEATH!

They shoot their teacher, parking couples, interfering older sisters and try to run down whiny astrologically-informed heroine Lori Lethin and her little brother. The climax is pretty bizarre too, with action evidently tamed so the brat actors can’t be harmed (grr). It’s trash, to be sure, looks like Graduation Day on the surface of it, and the kids annoyingly don’t get what they deserve…

*gender depending, though not always. My 8th birthday is one to be remembered.

Coming from Stephen King’s short story but going in a vastly different direction, Peter Horton and Linda Hamilton are a bickering couple on their way to Seattle when they run over a country kid on a back road in Nebraska. Contrary to the advice of your assembly line aged gas station owner, they look for help in the small town of Gatlin, which ‘has religion’. It’s got religion alright; three years earlier, all the adults were slain by their own offspring under the leadership of creepy Isaac, who takes advice from He Who Walks Behind the Rows, later revealed to be piss-poor flamey animation. One of the better killer-kid opuses with some creepy small town ambience but the wheels gradually work progressively loose until they fall off the wagon completely come the end. Nevertheless, it obviously did something right, spawning an unbelievable six follow-ups, some okay (2, 5 & 7), the rest leaving an aftertaste worse than a KFC cobette.

Victor: Bloody Birthday. Debbie, Steven and the super-eeeeevil Curtis win this one with their brand of bratty adulticide. 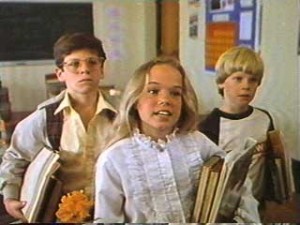 What Have We Learned From This Horror?