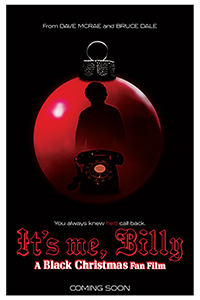 “You always knew he’d call back.”

I know it’s June, but here we are.

Fan films have come a long way since the days of a few friends, dad’s camcorder and a cheap dime store mask. As studios dither and overthink their franchises, resulting in legal disputes and long delays (*cough* Friday the 13th *cough*), fans with talent took matters into their own hands and the past few years have seen some low-rent output that’s arguably often better than what millions of dollars from a Hollywood studio could buy.

Into this hall of fame can be welcomed It’s Me, Billy, which gives us a 47-years-later sequel to seminal proto-slasher Black Christmas. College girls Sam, Emma, and Justine tried to access the house on Belmont Street where Sam’s late grandmother, Jess, was the sole survivor of the 1974 murders.

They journey on to Jess’s remote house in the wake of the woman’s death and before long receive a strange phone call from what sounds like several insane voices arguing with one another. Expectedly, Sam is soon on her own trying to fend off an insane killer until we’re escorted to an interesting final revelation that nods towards the distinct possibility of another follow-up in the future? 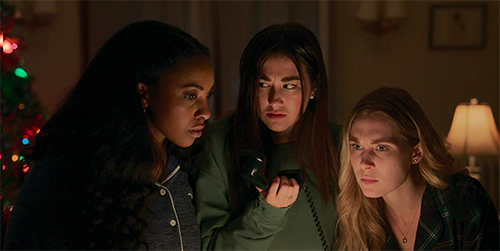 It’s Me, Billy certainly looks and sounds the part, with its snow-dusted exteriors of jagged trees and empty roads; the score is a strong echo of the ’74 film and every little creak of a floorboard is like a cacophony of clanging metal pans in the dark. It’s also well acted by its primary cast of three.

The coda is interesting but negates the film somewhat, as it all leads up to a moment where the film simply stops when it’s just about to spark to life. This sense of incompleteness is a disappointment but if there’s a future plan here (a la Never Hike Alone) then great. And it’s still better than the 2019 ‘remake’.