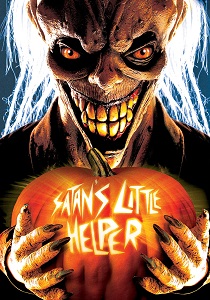 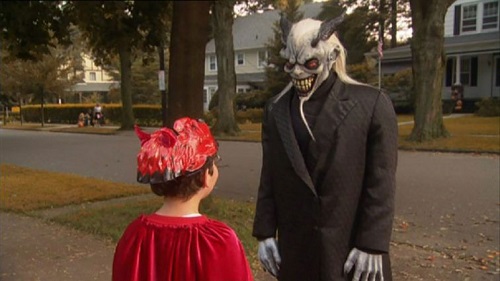 It took a good 20 years, but people finally cottoned on that I kinda like slasher movies, so ensuing birthdays have resulted in some garments to be proud of.

My wardrobe, everybody… Be forewarned – I don’t iron. 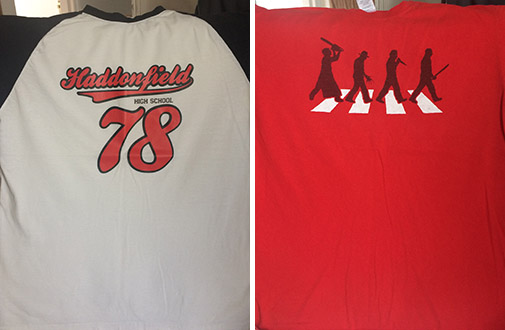 I love my Haddonfield High Class of ’78 t-shirt. Though someone recently pointed out Laurie would’ve been Class of ’79. Cheers, Paul.

My friend Kevin picked me up the awesome Abbey Road one, which nobody where I work can get their head around. Lonely life. 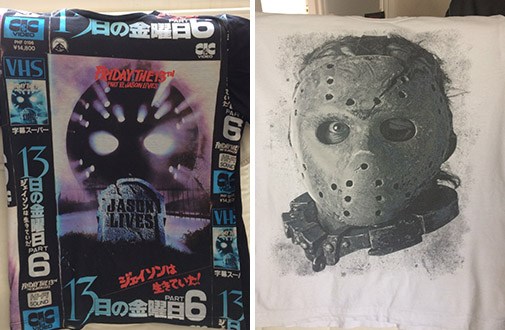 My newest (left) and my oldest: The Japanese VHS artwork on a stretchy fabric and super comfortable.

College roomie Grace bought me the New Line Jason shirt, which once terrified a child walking past me in the opposite direction. 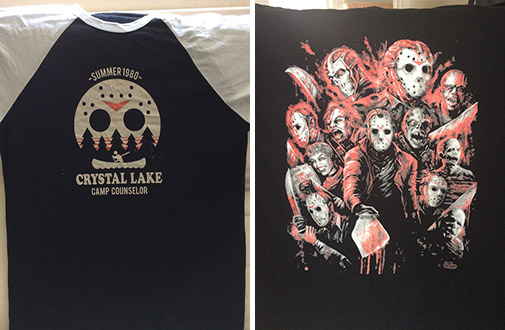 If we’re going to be pedantic, it was the summer of ’79 that Mrs Voorhees ran amok at Camp Crystal Lake, but that doesn’t make this baseball shirt any less awesome. Currently my favourite.

The many faces of Jason came on the same day. I was asked not to wear this to work. 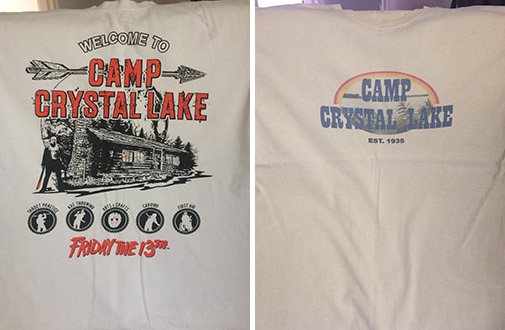 Sadly, the white one has stretched into a warped shape, and the yellow one (with ‘Counselor’ printed on the back) has faded over time. 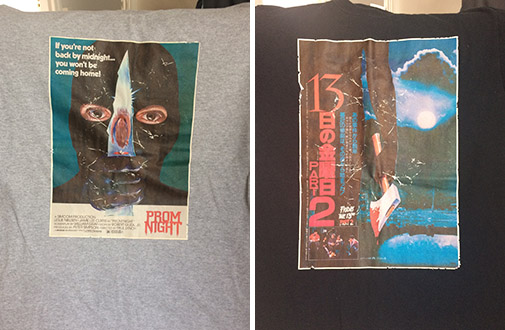 Classic Prom Night artwork and Japanese Friday the 13th Part 2; I can’t wear the latter as they sent a size too small.

There we go. Worn with cargo shorts circa April to October, cargo pants the rest of the year. 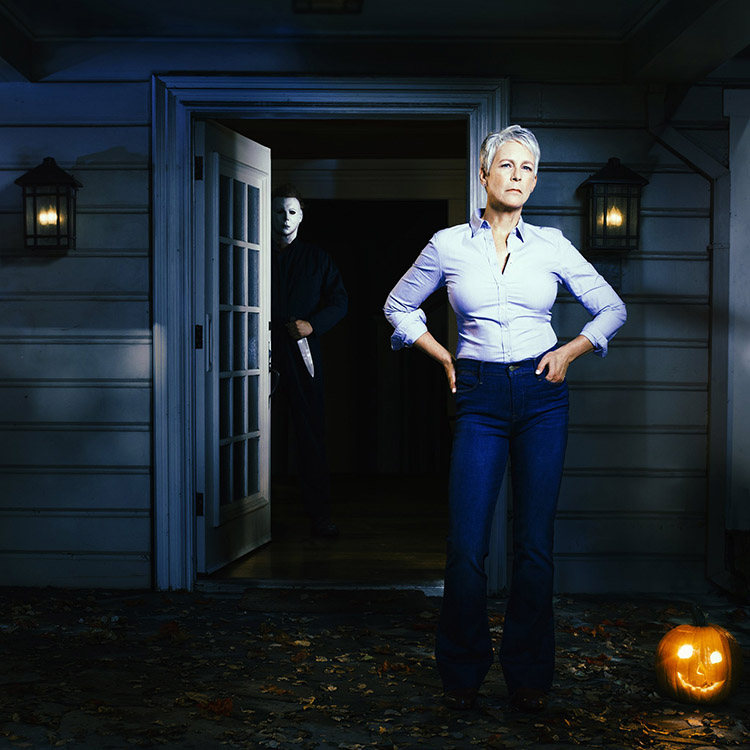 Well isn’t this just the best news ever? Laurie back again for Halloween H40. After all, it was never confirmed she died in Resurrection, maybe that tree broke her fall?

Fill up with fear 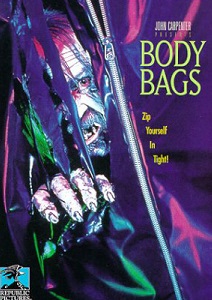 Probably about as close as we’ll ever get to seeing John Carpenter direct another slasher film, The Gas Station was the first of three segments to his 1993 anthology Body Bags (the other two concerned Stacy Keach having a bad hair life, and something about Mark Hamill’s eye).

Alex Datcher is perfect as Anne, a college girl starting her first nightshift as the cashier at a Haddonfield (!) gas station, not far from the stomping ground of an at-large serial killer.

Wes Craven is her first customer, a creepy old dude looking for chips, followed soon by a flirtatious handsome guy, then a homeless fellow after the restroom key, a playful couple, and finally silence… but then she spots the car on the mount in the garage going up and down by itself.

At 23 minutes, this is a slasher flick on speed, meta’d right down to a quarter of the usual length, and Anne is soon running and screaming: Windows are bashed in, bodies fall out of lockers… Pretty much everything that happened to Jamie Lee Curtis in the last act of Halloween happens here. 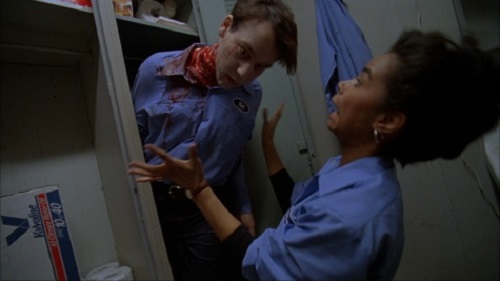 The casting of a black actress as the final girl is refreshing against Carpenter’s retread, featuring some of the same shot composition, and although we don’t get much time with her, we’re quick to support Anne through her ordeal.

It couldn’t be a feature length outing, but it’s nice that Carpenter stopped by to fill up on some stalking goodness. 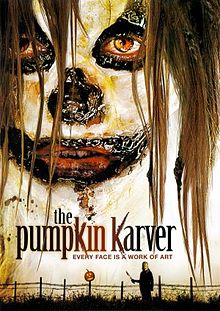 “Every face is a work of art.”

Weber and Zara are siblings new to the small town of Carver (groan), after a Halloween prank at their expense ended with Zara accidentally killing her sister’s boyfriend. One year on – to the day, as ever – they attend a big party away from adult supervision where a killer in the same mask as that used in the prank begins turning the faces of partygoers into human Jack-o-Lanterns.

A creepy old local pops up every now and then to torment Zara about the sacred job of a Carver and some babble about the ‘evil within’.

Given that the story strands a large number of characters in the middle of nowhere, nothing actually happens until the last 25 minutes, when it probably should’ve spread out the action to maintain interest. 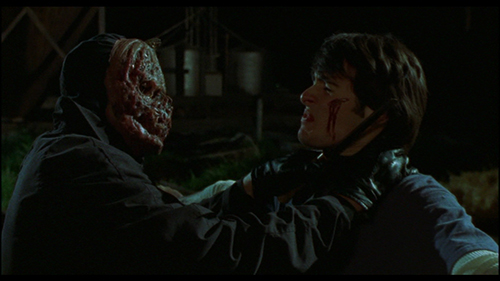 As it is, The Pumpkin Karver is a pretty boring affair with too few flourishes to make up for slack pacing and a stupid, unexplained ending. Combine these elements with annoying characters (too many of whom survive) and it has all the appeal of a rotting pumpkin on November 12th.

Blurbs-of-interest: Amy Weber was in Kolobos; Terrence Evans was the old perv in the wheelchair in both Texas Chainsaw Massacre re-do’s; David Austin and Charity Shea were in (the fairly similar) Scarred.