Tag Archives: slasher films that aren’t supposed to be funny but are funny

Dancing to a different beat. A really, really weird one. 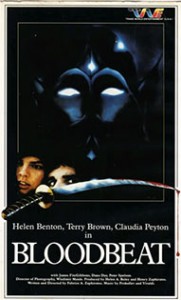 “Who can survive its reign of terror?”

If you are a dog owner, you’ll probably be familiar with that thing that happens when you talk at your dog and he cocks his head to the side like he’s trying to decipher your meaning.

I had this expression throughout the 87-minute runtime of BloodBeat, a film so strange it virtually defies explanation. But here’s what I did glean…

Christmas hols. Teen siblings Ted and Dolly come home to visit Mom and her boyfriend Gary at their rural Wisconsin farm, bringing along Ted’s squeeze Sarah. Mom – Cathy – is psychic or some shit. She thinks she knows Sarah from somewhere. Gary and the kids take Sarah hunting. She flips out (saving a deer!) and runs away, managing to somehow kill some dude who appears from nowhere. I didn’t see how it happened and had no wish to wind it back but I think when they collided he got skewered on an arrow maybe.

After it’s declared an accident, Sarah goes to rest and later finds a Samurai sword and costume (?) in a trunk, while obsessed-painter Cathy creates crappy, splotchy art downstairs. The presence of the Samurai stuff is later denied, even though nobody actually looks where she tells them it was. Again, maybe they did, my mind was a kaleidoscope of haze by now. 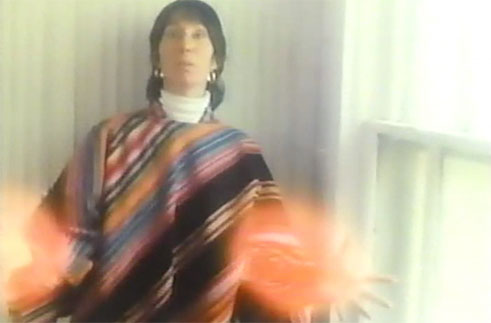 Eventually, a ghostly Samurai appears and begins slaying people with the sword. Sarah either dreams this or masturbates to it. I shit you not, hunting for answers I found a page that suggested the Samurai awakes whenever she’s got the horn. Anyway, it’s in a blue light added in post-production that looks like utter shite, making it difficult to see to the point of whatthefuck levels of annoyance. It kills Uncle Pete, kills the neighbours, and then Cathy goes all quivery, the house goes all Amityville, and Dolly screams a lot.

At the end, the Samurai thing faces off with Cathy, who’s now got glowy-orb things for hands. There’s a random montage of Hiroshima bomb footage and then Ted and Dolly come along and also have the glowy-orb things while O Fortuna shrieks on the soundtrack.

Most of the cast – and the director – never did anything else. Perhaps they went insane. Who knows? BloodBeat ticks about every synonym of weird there is going. Unfortunately it’s not really good-weird, it’s I-don’t-care-enough weird.

To those who wait 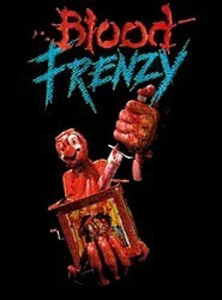 Laughter Lines: “So I’m a dick-smoker, huh? That’s great coming from a pussy-buffer and fucked up shrink!”

This one had been on my list since the mid-90s. With unreasonably high expectations, finding it after almost twenty years was a real moment of excitement! In other words: I never learn.

A drunken father finds his daughter playing with a Jack in the Box, flips, and she ends up killing him with some garden trowel-like implement.

Blah years later, a psychotherapist (MacDonald) accompanies an RV of her patients to a desert retreat in the Mojave to help them confront their issues, which include a Casanova complex, alcoholism, PTSD, and a hot blonde chick with nymphomania. Naturally, non-hot blonde chicks are never cast in this role.

There are arguments and insults, minimal psycho babble and, after the approximate amount of time it takes for a glacier to form, one of them has their throat cut.

In the morning, the murder is discovered and everyone blames the PTSD ‘Nam vet dude, then believe him when he denies it… They decide to split into pairs: Two stay with the immobilized RV, and the others go in alternate directions to find help. 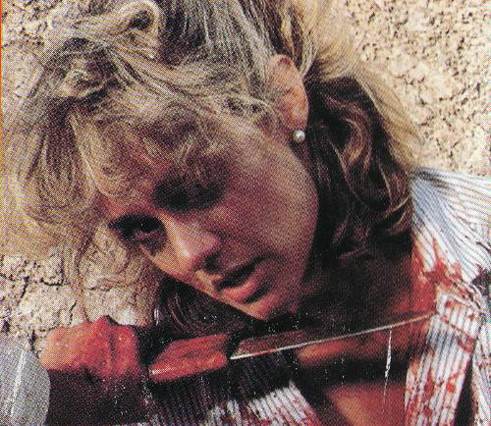 The Pop Goes the Weasel playing Jack in the Box appears and more throat slashings occur: Apparently you can actually continue screaming despite such a fatal wound.

Despite the foreknowledge that the child murderer was female, Blood Frenzy tosses in a so-so twist on the expected outcome, paving a way for quite a decent round of fisticuffs between the final living players coupled with some hilarious overacting. But with only seven central cast members, you can’t make too many incorrect guesses either way.

Echoes of Death Valley and The Hills Have Eyes rebound off the arid landscape, and a few amusing lines of Direlogue lighten things up, but ultimately it wasn’t worth the wait. Sad times.

Blurb-of-interest: Lisa Loring was in Iced. 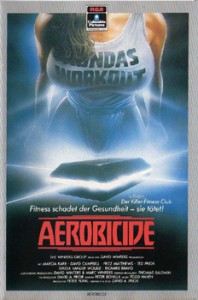 Olivia Newton-John has a lot to answer for. Back in the 80s when headbands were big, and hair was bigger, Jane Fonda had the world’s first leotard-graph, and day-glo spandex aerobics carried out to high-BPM synths was the soundtrack to life…

Naturally, someone was going to find a way to make a cheesy horror film about it. Gymnasiums and their equipment have featured in a few slasher films over the years, from the weights used to choke a dumbbell jock in Final Exam and the chick on that upside down sit-up bar thingy who receives death by barbell in Silent Madness, right up to head-squish courtesy of a faulty weight machine in Final Destination 3…

But in 1986, along came Aerobicide, exclusively set in and around Rhonda’s Workout, a Los Angeles club where a killer wielding a GIANT SAFETY PIN is doing away with various members. 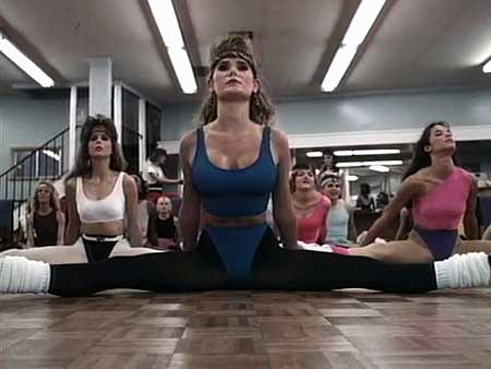 Beginning with a woman fried alive on a tanning bed, things skip forward gleefully ignoring the event (but we know it’ll be relevant later), and find the temperamental gym manager Rhonda unhappy that moody Lt. Morgan is skulking around the joint suspecting everybody of being the safety pin killer.

Lots of Eric Prydz-esque aerobics are punctuated by safety pin murders, always complimented by horrible sub-Knight Rider cop-after-perp chases are a construction site, as well as a couple of over-rehearsed punch-ups between the prime suspect, Jimmy, and new employee Chuck, who has taken it upon himself to solve the case. 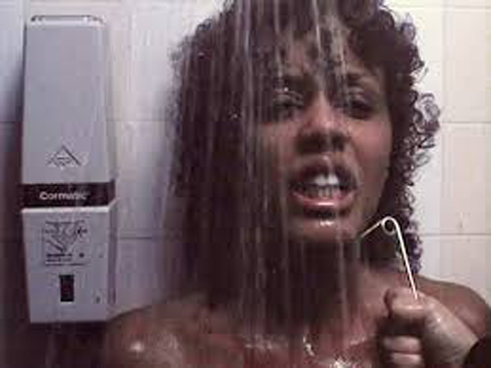 …and a bit of this

In spite of the cheery aerobics, the film suffers from electing too few likeable characters, populating the cast with unnamed gym members who utter a few inaudible lines before they exit the building of their own accord, or in a bodybag.

A likely contender for cheesiest stalk n’ slasher, watch the final shot, which is held for so long the actor looks like they’re about to keel over with impatience. 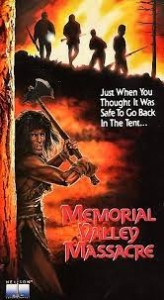 “A forgotten evil that will never die.”

Laughter Lines: “Any invasion of the eco-system by an unrestricted vehicle like this one could destroy that balance…”

Another new campsite opening disrupted by another primeval killer is the main stretch of this meagre-budget outing, that combines ludicrous dialogue with the usual sprinkling of knife fodder.

A slow build of weird occurrences is blamed first on a trio of obnoxious kids and some punk-rocker bikers, then the murder of a tubby rich kid is attributed to a bear before the last few campers team up to hunt down the stalker – who may or may not be the missing son of the gruff ranger who runs the place – before he hunts them!

Alas, the makeup and wig budget was clearly on the low side, as our psycho looks like any other Sunset Strip spandex rocker of the era, fitting nicely with some of the names on the cast roster: Jimmy Justice? Zig Robertson? Linda Honeyman? Perhaps Valley of Death was a metal band before it was ever a film!? 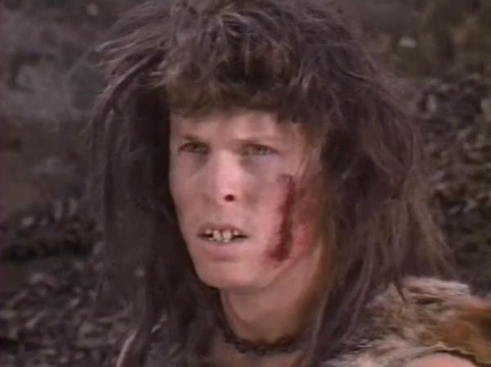 In a film that manages to rip off not only Friday the 13th but also some of its other knock-offs, such as the lamentably dull Final Terror, director Hughes avoids some of the more obvious clichés and makes Valley of Death quite a fun little movie with one or two pleasant diversions thrown into the barrel. Three people squashed by a truck tumbling down a ledge is darkly amusing. 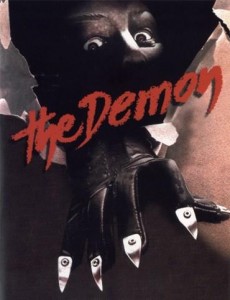 “It is among you… waiting!”

Laughter Lines: “Just because I’m not married even my mother thinks I’m on the other side.”

Believe it or not – and I probably wouldn’t – this Dutch/South African production has some of the best acting I’ve ever witnessed in a slasher movie, thanks to some well crafted dialogue from writer/director Rubens (at least most of it anyway), but stalls at two stars because it’s so excruciatingly boring until the last twenty minutes, when the Halloween clichés start to come thick and fast.

Mitchell plays a detective who is “just someone who’s been gifted with ESP” investigating the kidnapping of a girl from her bedroom by a mystery killer who wears – but unfortunately rarely uses – a steel-clawed glove, and is now after pretty kindergarten teacher Holmes, whose seriously-misinformed cousin Jo is dating a slick disco bunny. Both of those two are doomed, natch.

Simply one of the weirdest flicks you will ever see; Mitchell’s character never even comes within spitting distance of Holmes, and is eventually shot dead by the kidnapped (and now dead) girl’s mother  (“did your ESP see this coming?”) and the two plots only have the killer to relate them!

The final showdown between heroine and killer is rousing enough, on the heels of her attempted escape in nothing but panties. Alas, too many boring murders (usually strangulations and asphyxiations) and the damage is done. Look for the sign to “Boobs Disco”.