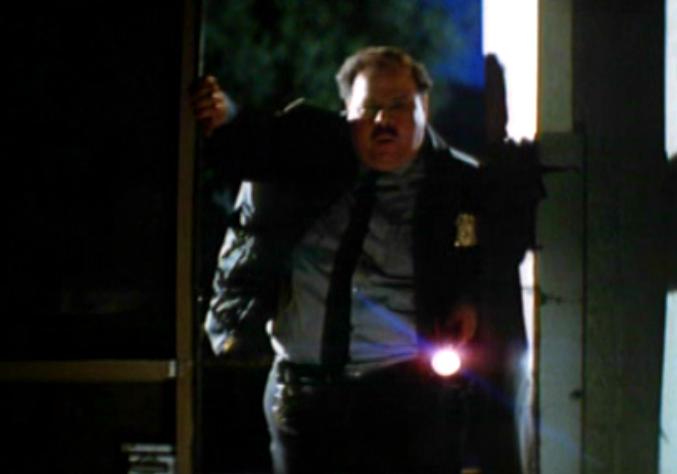 Overview: Doomed security personnel (DSPs) are as old as the hills in the slasher realm. They’re the cop or security guard, hardly ever credited with a name beyond something like Officer Bob, who just happen to get in the way during the killer’s tantrum and commonly end up near the top of the body count list, crumpled and forgotten in the corner with a barbecue fork sticking in their eye.

Linguistic Snapshot: “Hello? Who’s there? This abandoned roller disco, which is rumoured to be haunted after the murders ten years ago tonight, is off-limits after hours!”

Styling: Almost all DSPs are adult males who wear uniforms with epaulets, sometimes hats, the faithful flashlight, buckled belts and – if they’re lucky – holstered weapons (fat lotta good they’ll do). Security guards are quite often overweight and usually seem to bear facial hair of some description. 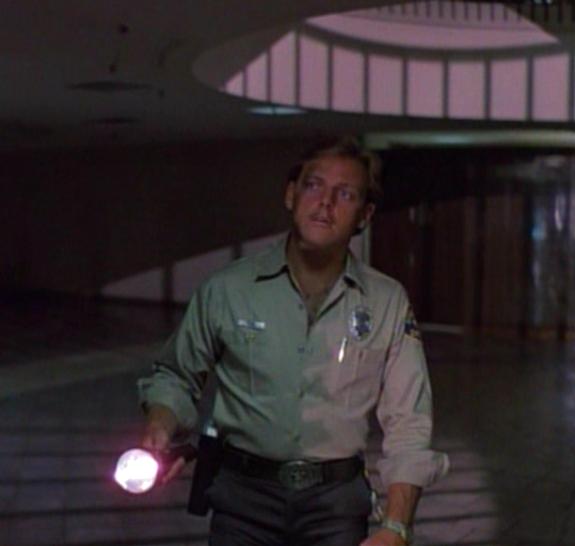 Hallmarks: A lackadaisical work ethic is a must, there’s no time for motivation in this job. Just hang around with your coffee and doughnuts and dismiss the hysterical teenage girl who says everyone is dead… Hey – she’s a pretty lil thang!

Downfall: Despite being a full grown man, DSP is often more naive than the teenagers who will later die, though it is his job to go and check out that weird noise, but he’ll also squat down to feel for the killer’s pulse and ignore the final girl’s pleas to turn around or follow her in the firm belief she’s just mental and he can best the bastard!

Genesis: The first DSP I can think of is probably Jennings the cop in Black Christmas who is supposed to guard the sorority house but instead is found in his car with a cut throat.

There’s Mr Garrett who makes the fatal error of investigating the basement in Halloween II; Todd the country music loving security guard in The Initiation; the cop who shoots the wrong Santa in Silent Night, Deadly Night (“so far all you’ve done is harm!”) and the campus security cop, Mitch, who we don’t know if is dead or just asleep in Final Exam. 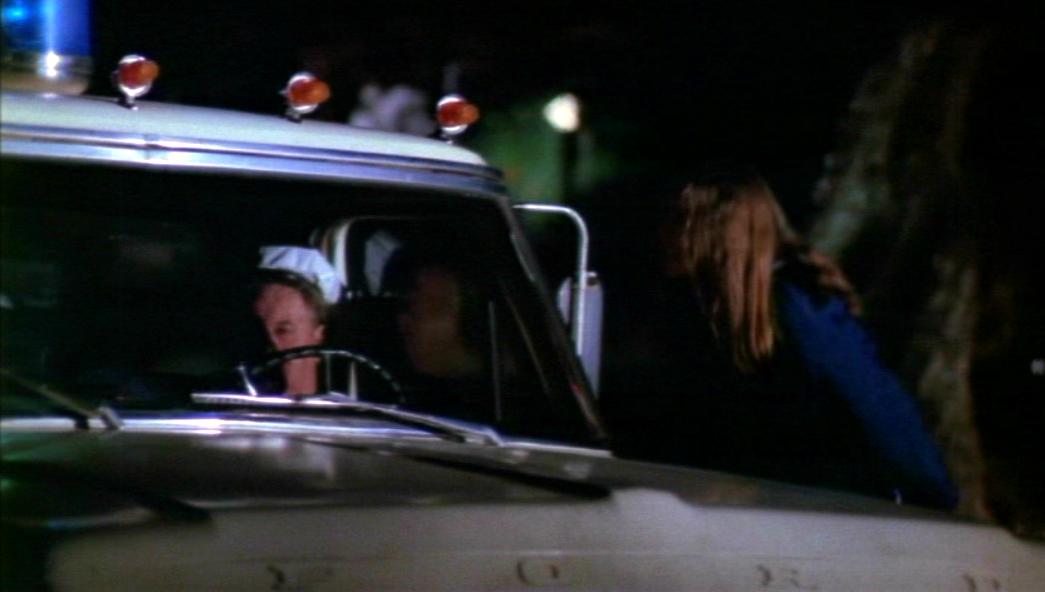 Wake the hell up!

Legacy: In the late 80s, DSP turned up all over the show, such as the ill-conceived ‘comedy cops’ from Halloween 5 who were given their own clown-theme every time they bumbled on to the screen before Michael answered our prayers and did them in with a pitchfork.

When Scream pushed open the floodgates for the 90s rebirth, we all cooed “Noooo!” when Sarah Michelle Gellar’s ride home got out to help a stranded stranger fix his truck in I Know What You Did Last Summer, knowing well in advance of him that this cop was about to eat some hook and even the assigned agents in Scream 2 were swatted away like flies by the killer.

However, there were a couple of exceptions made in both Halloween H20 and Urban Legend where the campus security guards not only lived but were also instrumental in the heroine’s escape and apprehension of the killer. LL Cool J may have survived multiple bullet wounds when mistaken for Michael Myers (they look so similar with their pasty white- …uhhh) but he returned to drag Jamie Lee Curtis away as she stabbed her brother and Loretta Devine’s blaxploitation loving rent-a-cop saved Alicia Witt’s ass, also surviving being shot, and got to kick some major killer-ass in the sequel, and she did it all with sassy one-liners and attitude.

There’ve been plenty more failed attempts of rescue by police academy failures – the poor schmuck ranger who utters but a handful of words to Desmond Harrington in Wrong Turn before an arrow goes through his eye; the nightwatchman of the haunted fairground in Dark Ride who might’ve just saved the day were it not for the head-splitting blade the killer thunked in his noggin and lest we forget the Valentine horndog, Detective Vaughn, far more interested in Denise Richards’ slender derriere than solving a murder case that he quite literally loses his head over. 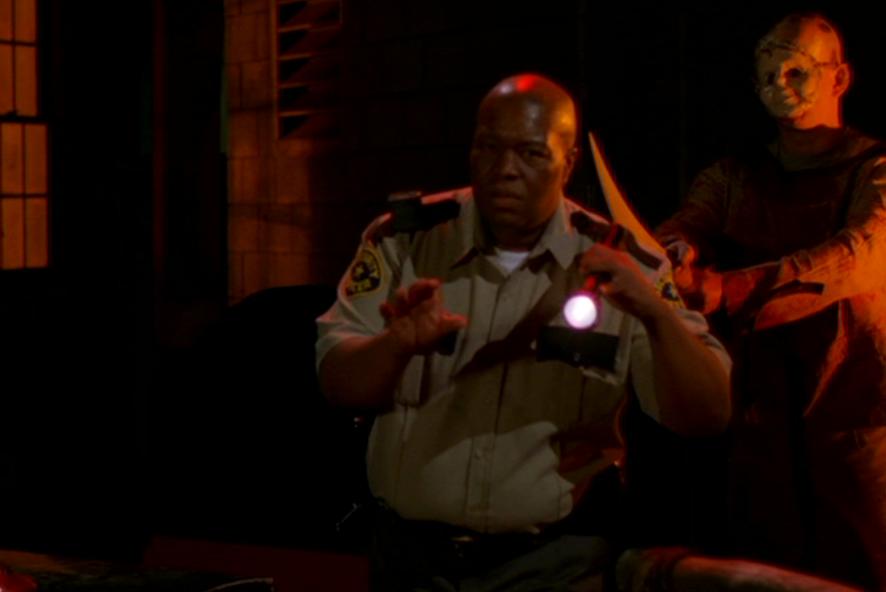 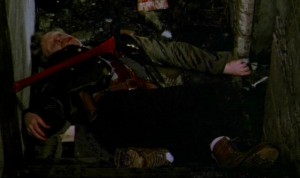 Yes sirree, anyone considering a career in security should pick their assignments carefully, ‘cos you’re not safe at prep school, university, the woods, the old abandoned fairground, the mall, your squad car, hospitals, dilapidated hotels, factory yards, or even space…

It kind of reminds me of that scene in the first Austin Powers where the poor, unnamed henchman’s wife is informed of his untimely passing… Poor schmucks just trying to make a decent living – let’s hope they’re all drinking buds in the next life, comparing wounds and playing trumps over how prolific a maniac it was who got them in the end… RIP, not-very-good security dudes, if only you swapped shifts with Bob.

Overview: The Macho Asshole is the SBC who we want to see die the most – with extreme humiliating prejudice. Usually appearing as a young, muscular dickhead who has no respect for anyone, and thinks he can beat the killer with his fists. When the shit hits, he’s for himself and nobody else.

Styling: Vests and sports gear – MA is the best at all sports. Now swoon over those guns, ladies!

Hallmarks: Short-fused, homophobic, sexist and selfish but normally good looking and athletic – all the things we want to see destroyed in a frenzy of grue.

Downfall: MA has been able to get away with what he wants for now but with uncontrollable temper comes uncontrollable situe and he will discover that being a buff testosterone hive will not help in the face of an axe-toting maniac, who will inevitably be stronger, even if physically smaller. 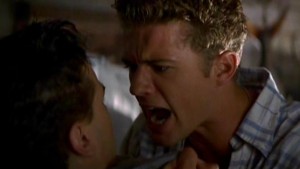 Genesis: The earliest MA’s were found in the post-Halloween cycle, such as high school bad boy Lou in Prom Night, who makes the fatal error of substituting the nominal Prom King with himself and then gets decapitated.

Then there’s image-obsessed Greg Hellman in Happy Birthday to Me who, it turns out, just doesn’t have the balls to survive a female killer (loser!); dopey jock Wildman in Final Exam has less attitude but also thinks he can out-swing the psycho and is ironically wasted with a piece of gym equipment.

But Macho Asshole honors surely belong to Glazer from The Burning. Glazer bullies the smaller kids and parades around in short shorts trying to impress his object of lust, Sally, eventually getting her into the sack only to disappoint her with a dud shag and deservedly meets the sharp end of the killer’s pruning shears. 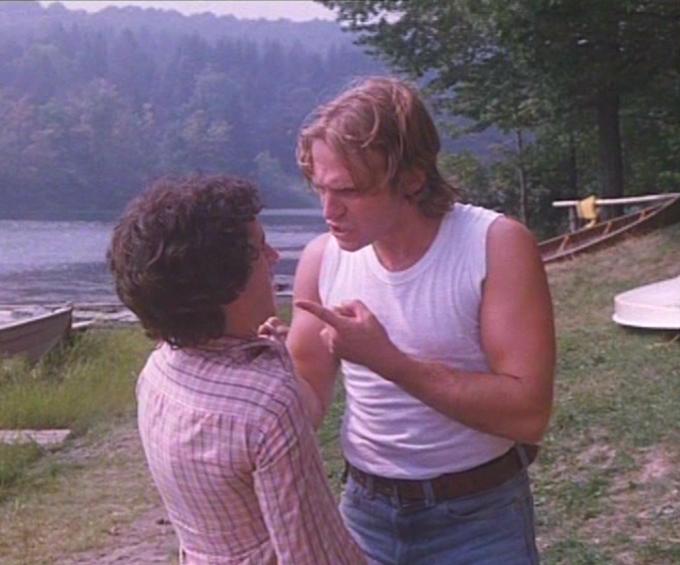 Legacy: In the cynical days of, well, now, Macho Asshole has become an almost permanent slasher movie fixture. From uber-dick Barry in I Know What You Did Last Summer (and his pale imitations of both sequels) to Carter in Final Destination, who is so arrogant that he has the sheer audacity to state “I’m never gonna die,” for the audience to chant “oh yeah?”

Other films have traded purely upon hateful figureheads populating the doomed cast: See No Evil pit a group of utterly detestable young offenders against a hulking wacko and Wilderness placed some Borstal-boys on an island with a psychotic ex-SAS maniac. 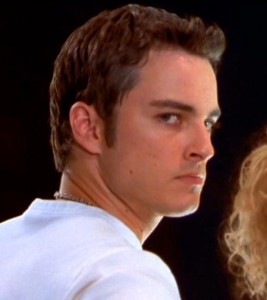 Most recently, we had Trent in the Friday the 13th remake acting like a jackass until he eventually met the angry side of Jason and Tormented featured a particularly horrible bunch of English schoolkids having the tables turned on them by their undead bullying victim.

Exceptions: Some jocks in the realm might be dumb horndogs but occasionally they turn out to be harmless hulks, such as Arch in April Fool’s Day (played by Tom Wilson, prolific MA Biff Tannen from Back to the Future), the randy jock in Hack! or gym-fit, gay hero David in The Beaten Track - that’s the book I wrote, y’know?