Tag Archives: who finances this crap!? 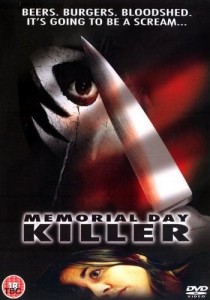 A boy drowned in Memorial Lake. Three years later, his sister Rachel and her friends return there for a weekend getaway in one of the cabins by the water. Sound familiar? Mrs Voorhees would sue.

This special needs slasher gained slight notoreity for being one of the first digital features, but it’s so damned cheap and grainy it doesn’t matter one bit. It’s strictly amateur night all round, with acting that rivals a GCSE drama production and has a killer in a mask that not only appears to be made of crate paper, but is also shaped like a hockey mask!

A so-so twist prevents things from being totally risible but it’s a case of too damn little, too damn late. One trip down memory lane not worth taking.