To Sir With Love. And Murder. 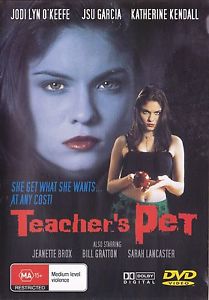 “She’s not your average student.”

While it may shock some to comprehend how Rose McGowan girl-stalker-slasher flick Devil in the Flesh did enough to spawn its own sequel, accept now that Rose has morphed into Jodi Lyn O’Keefe as Debbie Strang, the older-man-loving bunny boiler in what’s essentially Debbie Does College.

While McGowan was off being Mrs Marilyn Manson and thus skipped the sequel, Jodi instead becomes the syringe and hairdryer-toting schizo who begins by escaping your garden variety low-security sanitarium to kill and replace Sarah Lancaster’s college-bound rich kid and takes a creative writing course led by sub-Clooney tutor Garcia (known to us as Rod from A Nightmare on Elm Street).

Problems arise when her temper gets the better of her and she kills a few extras until she is eventually found out and the slapdash finale that recycles the ending of both the first film and also Urban Legend, before staple-gunning an unexceptional twist on to it.

As the first round, the film cannot seem to decide if it wants to be an all-out dead teenager affair or a sultry thriller, so things end up back in T&A county with only a handful of interesting elements: Brox is good as O’Keefe’s nerdy roommate Laney (ironically the name of the school dork who dated O’Keefe’s character’s boyfriend in She’s All That), who is set up as the possible heroine, but replaced by the far less interesting Kendall.

If you can look past these sorts of TV-movie irks, Teacher’s Pet is entertaining enough straight-to-video fodder.

tagged with before they were famous, death on campus, get your own ideas!, Nu-di-ty, sequel city, slasher