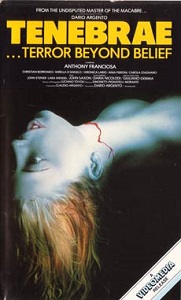 My favourite of Argento’s more slasher-tilted films, reportedly written on the back of his own experience with a stalker.

Franciosa is famed American writer, Peter Neal, who is promoting his latest novel, Tenebrae, in Rome, with help from his kitschy agent Saxon, his personal assistant Anne, and a young intern.

No sooner does he step off the plane than a series gruesome razorblade murders commences, each one based on incidents from the titular book. Peter takes along his young protege to investigate and potential suspect and the mystery thickens to the point where it’s entirely possible that there are several independent killers at work.

The giallo touches are played to the hilt, with archetypal Argento camera work, and the black-gloved maniac creeping around off camera. Memorable moments include a sticky severing of an arm via axe blow, and a gory end to the eventual killer thanks to a pointy piece of modern art. As usual, beautiful young women are the primary targets for the razor-flashing loon, who cuts and slashes his way through several semi-clad babes, one of whom is a journalist known to Peter, who states that his work is sexist and that women are portrayed only as victims. Her murder, therefore, seems more than a little mean-spirited and a possible dig at feminists who have voiced concerns over Argento’s earlier output.

The slight distractions swept aside, this one is up there.

Blurbs-of-interest: Argento’s other slashy exploits include Deep Red, Phenomena, Sleepless, Trauma, and Opera. Of these, his one-time wife Daria is in Phenomena and Opera; John Saxon was in A Nightmare on Elm Street‘s 1 and 3, plus Wes Craven’s New Nightmare, and also Black Christmas, Welcome to Spring Break, The Baby Doll Murders; John Steiner was later in Camping Del Terrore.