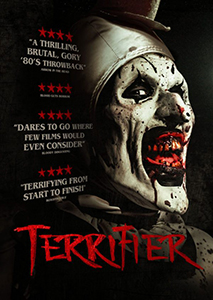 Laughter Lines: “What if he’s out there watching us right now?” / “Show him your tits.”

Characters who largely don’t make stupid decisions, some awesome camera and FX work, and a genuinely unsettling figure in Art the Clown, all eclipsed by a scene where a young woman is suspended upside down, naked, while he saws her in half from between her legs to her head, which plays out like some incel jerk-off fantasy found on the dark web.

Elsewhere, it’s women cowering, women tied to chairs, women being beaten and shot, while the male victims (albethem greater in number) are almost all killed from behind without even seeing their attacker and always fully clothed.

I thought and hoped we were past this kind of overtly sexualised violence. Without it, this would’ve had an extra star-and-a-half and a much longer review.