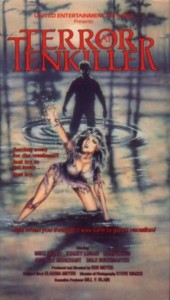 “Just when you thought it was safe to go on vacation!”

No-frills Friday the 13th wannabe #623 where another teen vacation ends up with dead bodies all over the place.

Gal-pals Logan and Merchant take time out at Lake Tenkiller to evade the former’s scary ex-boyfriend (who intends to “get even” with her) where they swim and take jobs as waitresses at the local diner where the serving beauties have a habit of ‘walking out’ on their jobs and never coming back.

Of course we know that they’re really being slashed to bits by a local psycho who the film makes absolutely no attempt to disguise in any way – but in a film with a cast of eight people, there ain’t much they could do to distort his identity.

Tenkiller looks like the scraps of a million better killer-on-holiday slashers with tedious scenes and precious little dialogue or bloodshed – the film even has a tacked on voiceover epilogue in a vain attempt to make sense of itself. There’s one good laugh: the road sign for Lake Tenkiller also mentions the next town along – called Gore! Maybe that was going to be the sequel.

tagged with get your own ideas!, slasher, spoilers, the 80s, what the hell!?, who finances this crap!?