I Was Made for Killin’ You Baby 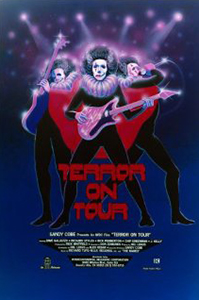 Laughter Lines: “I had to kill them… They had no moral boundaries at all. They were whores.”

The Clowns are a KISS-lite rock band on the way up, who dress in campy makeup and capes, and feign executions of nubile dancers during their show… But their road to success is endangered by the murders of groupies-cum-prostitutes at their gigs. The fiendish slayer dresses identically to the band for his murderous outings, so it could be anyone. ANYONE!

Well, not really. There’s only really the band, their manager, and a couple of roadies on the suspect list. It’s not especially challenging to correctly guess who it is and the revelation, complete with the standardized misogynistic motive (see Laughter Lines), is a through-the-motions affair.

Terror on Tour was reportedly shot in just seven days, with the real band (The Names) largely playing themselves, acting duties fall largely to their manager, the roadie guys, a detective who appears halfway through, and the ex-junkie girl he hires to infiltrate the backstage area and bait the killer.

The other ‘characters’ – or rather the victims – are barely afforded names let alone anything else to do than remove their clothes and say things like: “Come on baby, I’m ready, ooh you turn me on so much.” It’s sleazy, grindhousey, underlit, has bad sound, and – worst of all: Boring. 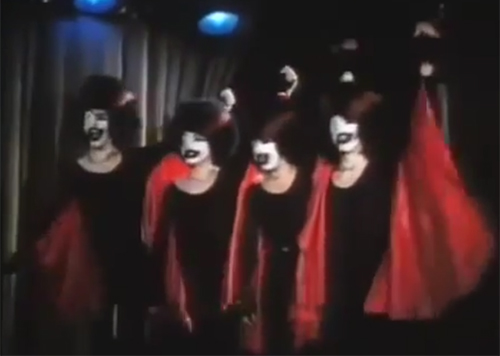 Things do pick up a little when Jane, the bait, arrives, and I expected her to function as a sort of last-minute final girl, but she’s cruelly knifed when she encounters the killer, leaving no female intact come the end. But, I suppose there have been more than a few films where no men were left standing.

As far as metalsploitation films go, at the least the band’s music isn’t suicidally bad for a once, it’s no better nor worse than Rocktober Blood.

Blurbs-of-interest: Rodriguez was in Home, Sweet Home, which shares its producer Sandy Cobe, with this film, as well as To All A Goodnight and Open House. Cobe appears here at the theater manager at the first show.

tagged with Nu-di-ty, obvious identity of killer, slasher, the 80s, who finances this crap!?