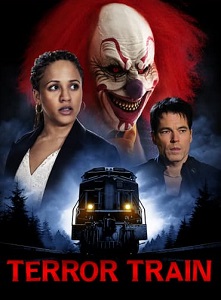 ‘Familiarity breeds contempt’ as the saying goes, and things don’t get much more familiar than remakes that opt for an almost shot-for-shot route of updating a ‘classic’. Is 1980’s Terror Train a classic? Outside of slasherdom, probably not, but for us? Yes. Yes it is. When 2008’s Train abandoned being a remake of it in favour of being Hostel-by-Rail, the door was left open.

That the plot is exactly the same at least saves me typing it all out again, but prank, Kenny, trauma, three years later, train. The only notable differences are that it’s a Halloween party instead of New Year’s, Carne is now a watchful older lady, and there’s a new character in the form of Sadie, a junior conductor of some sort, who does most of the walking up and down the train and discovering of bodies.

Because writers Carpenter and Martin (who wrote several seasons of Slasher between them) know that horror nuts will remember the twist, the identity of the killer has been changed as well, but with a reduced number of players, their identity isn’t too surprising once revealed.

The main problem with this made-for-TV redux is that it looks very made-for-TV, with watered down production polish, characters who, despite being based on their sympathetic former instances, are uninteresting and saddled with feeble dialogue (“I swear, I’m a good person!” squeals the heroine as the killer closes in on her), and just a disappointing cheapness that manifests with too few extras, making the party look lifeless and poorly attended.

Not awful, just pedestrian, which is kinda ironic given that it’s set on a train ¯\_(ツ)_/¯

tagged with Canuck, get your own ideas!, Nu-di-ty, remake, slasher