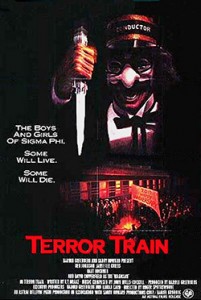 Laughter Lines: “Alana, you’re always walking out on my parties… This time, you can’t!”

One of the few slasher movies to have gone into production between Halloween and the release Friday the 13th, thus taking most of its cues from the former, most notably casting Jamie Lee Curtis in her third slasher flick (she came straight from Prom Night to this), and having an older famous actor to pivot the billing.

It’s pre-Friday status means that Terror Train isn’t as cliched as subsequent genre entries that upped the grue. Curtis is Alana, who is roped into a frat prank on shy freshman Kenny Hampson (MacKinnon), that turns out to be tricking him into believing he’s going to bed her, only for him to climb into bed with a dismembered corpse borrowed from a morgue by the joke’s selfish architect Doc (Bochner). Kenny understandably loses his shit.

Three years and an opening credits sequence later, the graduating class throw themselves a costume party aboard a chartered train, under the watch of wise conductor Ben Johnson. Unbeknownst to them, Kenny Hampson is back and still angry. He kills each of the responsible students and then dons their costume, starting off in a creepy Groucho Marx mask, then the Creature from the Black Lagoon, a witch…

Along with the vengeful Kenny, Alana is also still pissed about the prank, having not been filled in on the finer details (i.e. that it was a corpse) and is dismayed to learn that she has been fooled into attending the party. Her nice-guy boyfriend Mo is struggling to balance his friendship with Doc and relationship with her, and who hired the moody magician (David Copperfield, the, like,totally real magician) who’s come along?

The Conductor is first to discover the murders just as Doc has a coincidental tragedy of his own: The train is stopped and the guests alerted, at which point Alana figures out that the victims were all in on the nasty prank and that she and Doc are next… 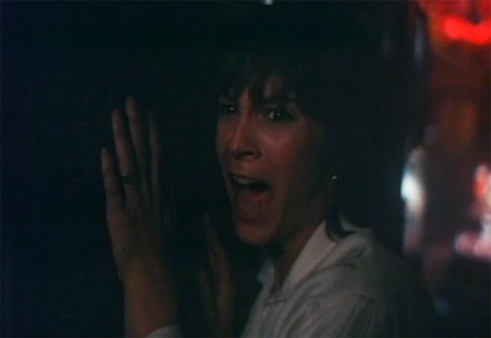 Once it’s down to Alana and the killer, Terror Train shunts gear into cat-and-mouse overdrive as she’s accosted up and down the unpopulated areas of the train by the masked maniac. She fights back, thinks she’s killed him, he continues to bounce back. But if we know who it is, why all the masks?

I first learnt of Terror Train via Vera Dika’s book Games of Terror, which sadly gave away the big twist, but it’s awesomely done nevertheless and if I didn’t already know of it, I wouldn’t have seen it coming.

Watching the film post-genre heights highlights a lot of dumb behaviour, even Jamie Lee repeatedly wanders off by herself without a chaperone. It’s also low on bloodshed and nudity, erring more towards Hitchcockian suspense and character interactions than stalk-n-slash. But don’t let that put you off, Terror Train means business. 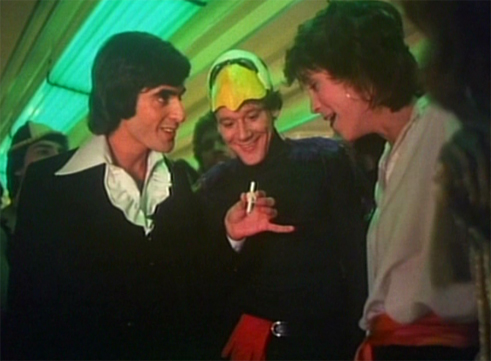 There’s also a curious homoerotic subtext at play. Doc tells Mo that if Alana dumps him: “You’ve still got me – I mean it!” An interesting little footnote amidst the carnage.

I once read a film almanac that called Terror Train “the best slasher movie made in the 80s” and, although I have others I prefer, in terms of overall quality, it’s not far off.

A planned remake in 2008 was quasi-aborted, renamed just Train, and took a different track (ho ho ho!) as a Hostel rip-off.

Blurbs-of-interest: Sandee Currie was later in Curtains (as Sandra Warren); Joy Boushel was in Humongous; Hart Bochner was a film professor in Urban Legends: Final Cut; Howard Busgang had a small role in Killer Party; D.D. Winters found a career at Prince’s protege, ‘Vanity’. Remade in 2022.

tagged with before they were famous, Canuck, Nu-di-ty, slasher, star power, the 80s